Dubai has more than 5.500 restaurants listed on Tripadvisor. Many of these, especially anything in the fine dining territory is inside a hotel. It is a city where you can easily find any type of cuisine that you would feel like eating. There are numerous European influenced restaurants with French and Italian cuisine in the majority of them. Indian, Lebanese, Chinese and Japanese are pretty common. To the fine dining category, most of them have the name of an international famous chef like Pierre Gagnaire, Yannick Alleno, Marco Pierre White etc.

My first time in a restaurant of Pierre Gagnaire was in his flagship three michelin starred one in Paris in rue Balzac. Now my second visit at Pierre Gagnaire, in Reflets. This restaurant is located inside the Intercontinental Hotel in Dubai Creek. To get there you can easily take a taxi from anywhere in Dubai as they are very reasonably priced. 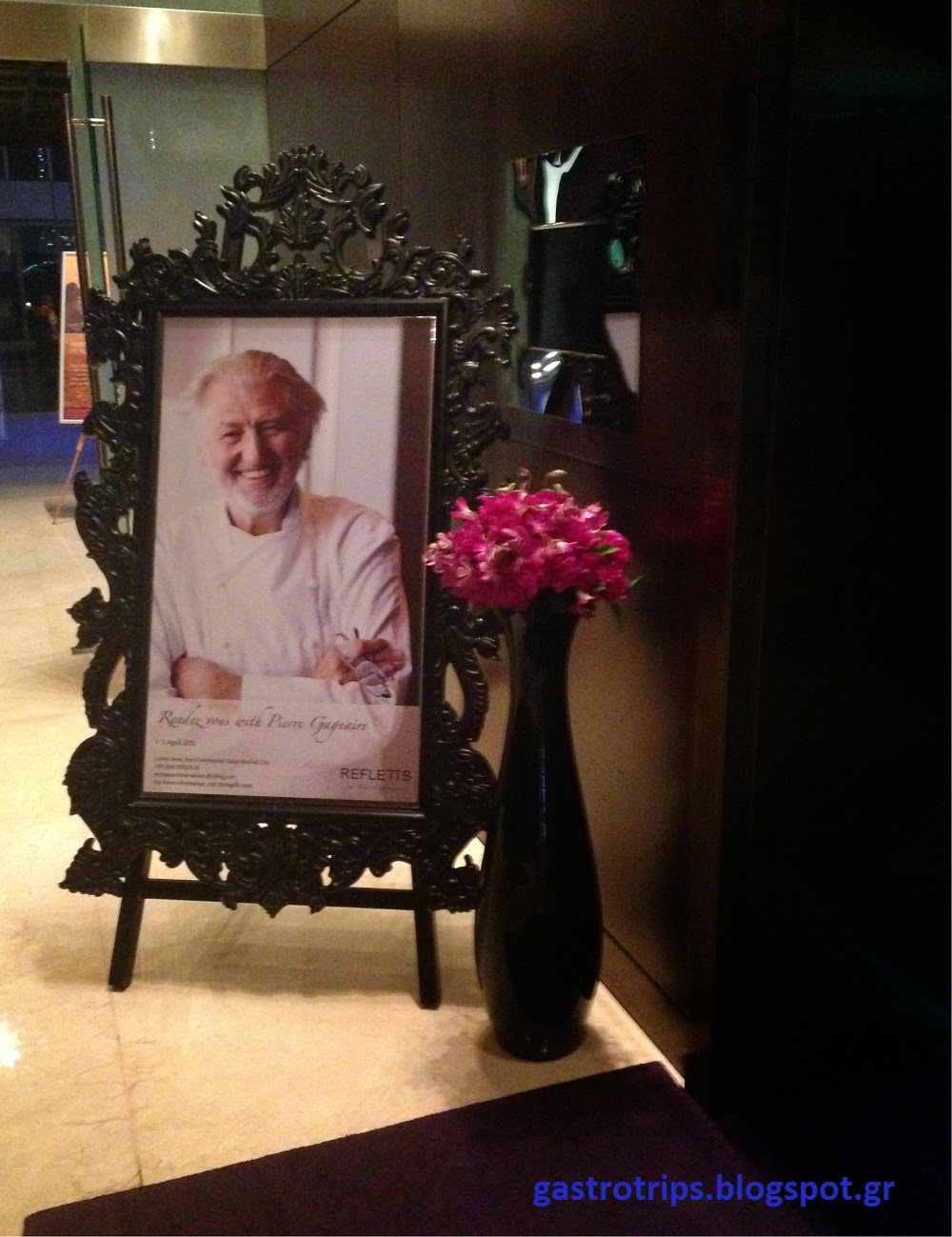 During our visit, Pierre Gagnaire himself was in the restaurant. While entering inside and passing the hall to the main dining salle we saw him cooking through the glass window of the open kitchen. Later in the evening he came in to the dining room to greet every guest.

The restaurant was full during our meal, so I would advise you to book well in advance.

We started with some nibbles. In the center a tuna based preparation with a thin crust on top. To the right a Parmesan cracker and on the top Campari marshmallow, cucumber with an alcoholic and lime based gelee. The tuna one was the best. 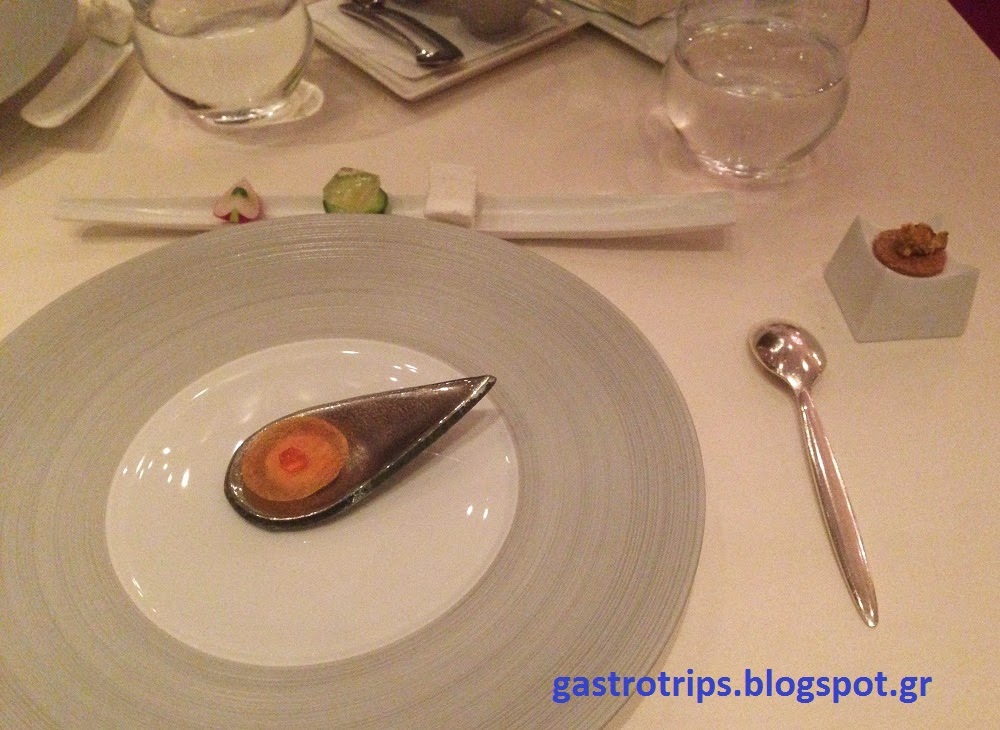 More amuse bouche followed, crackers and sticks plain or with Parmesan in the middle, with two dips, guacamole and olive tapenade. Also paper thin slices of bread with pistachio and nuts were good. I wonder how they managed to cut them so thinly. 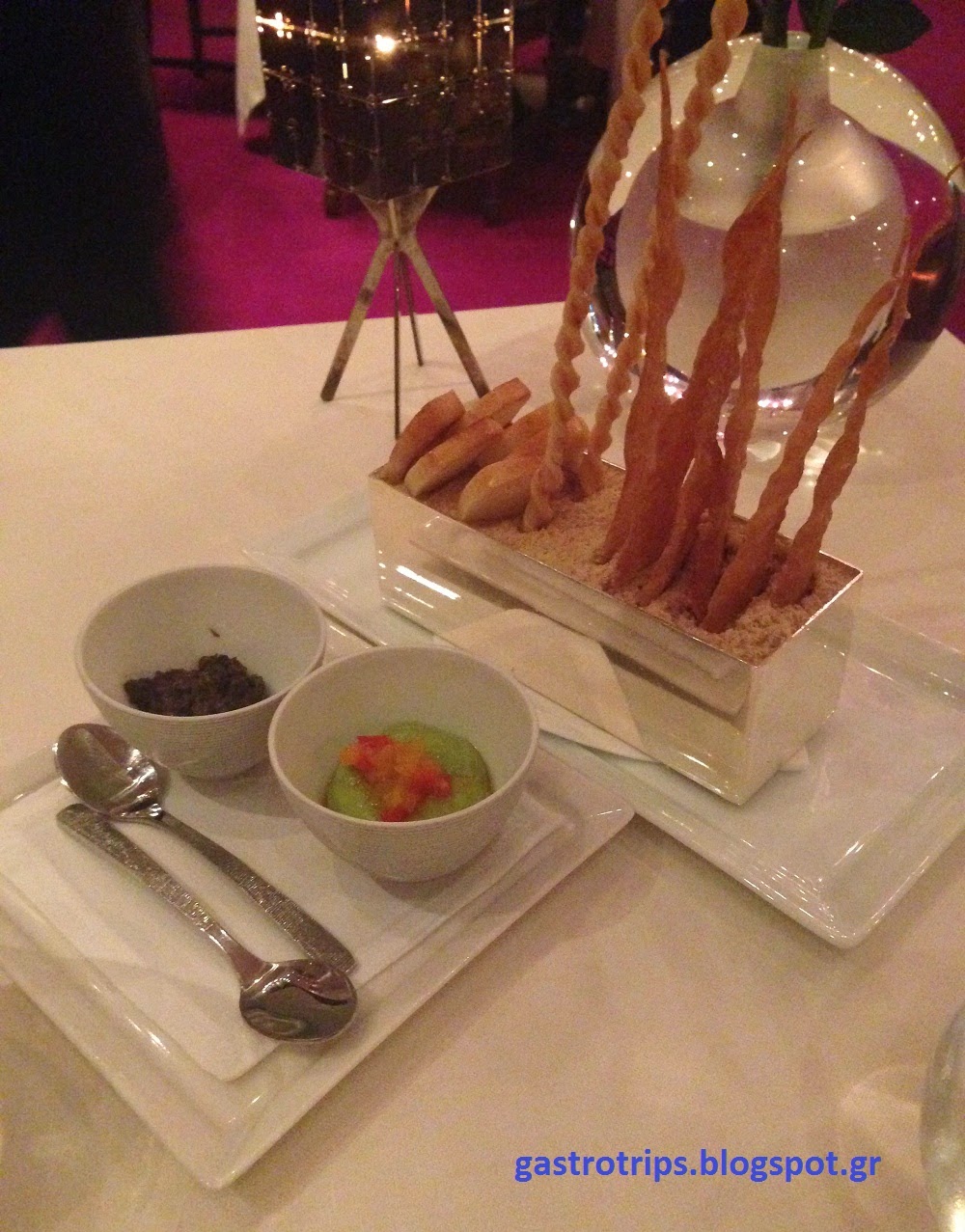 Bread was of two kinds served hot, baguette and milk bun like a brioche.  Both amazing, the baguette having a nice crust and flavor while the delicious brioche was perfect to pair it with the French olive oil or the butter. Butter was also of two kinds, salted and with seaweed. 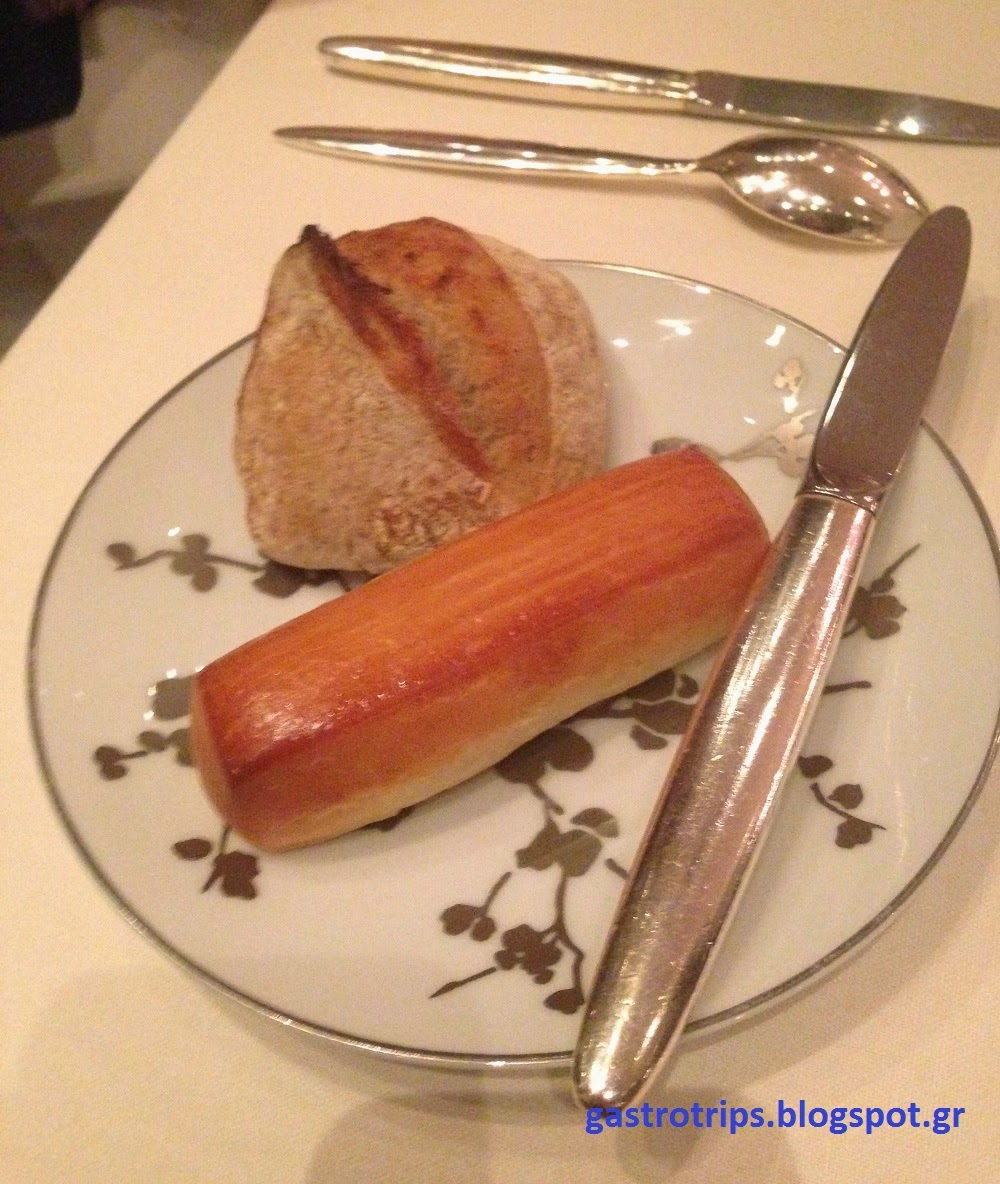 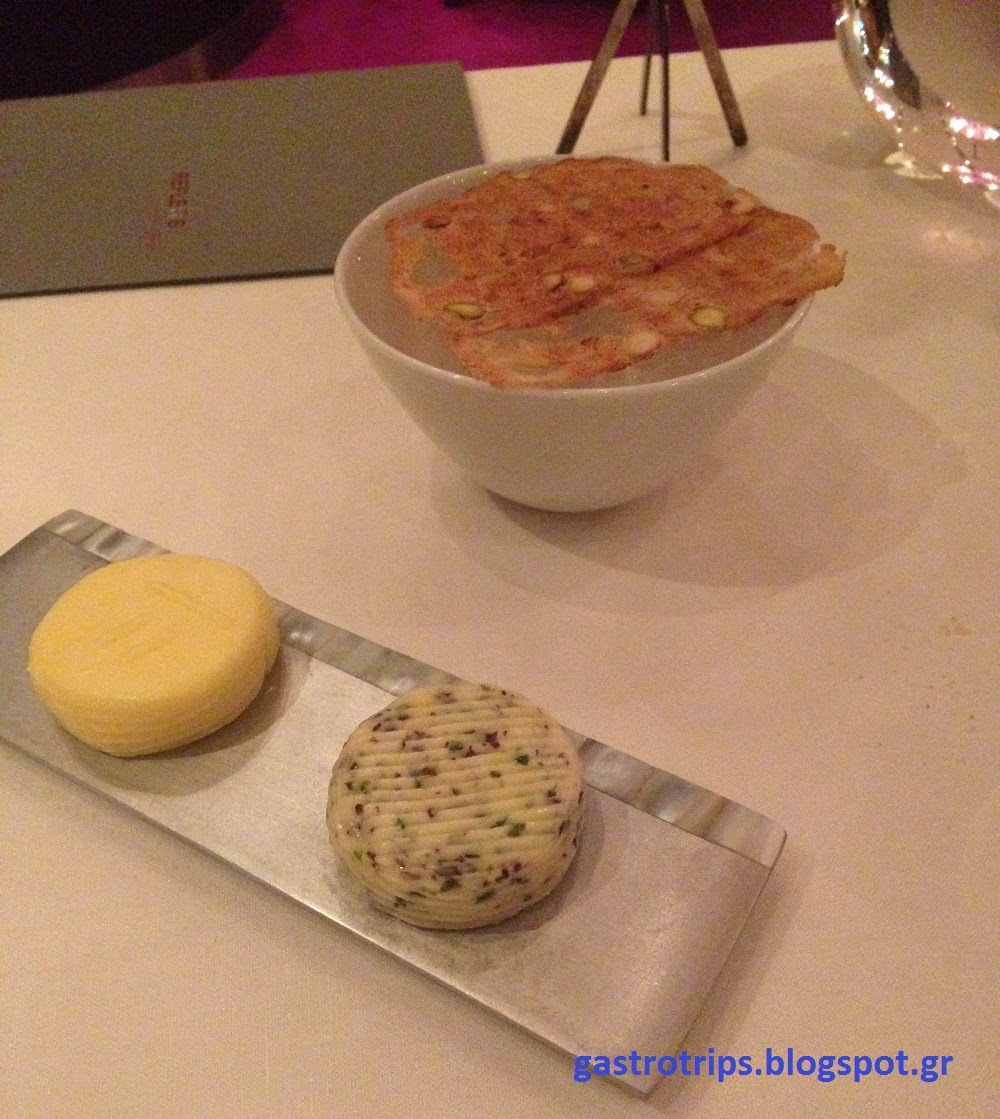 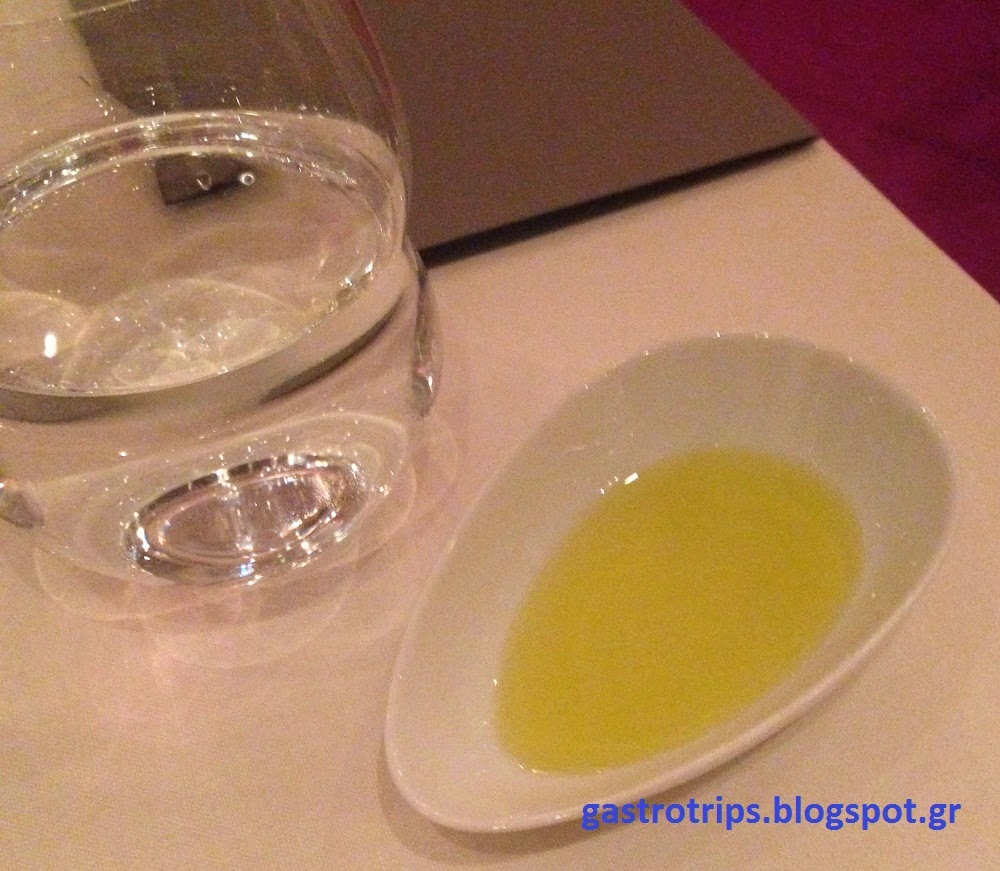 White asparagus tips rubbed in Colonnata pork,
Parmesan cream flavored with vodka,
poached egg and Aquitaine caviar.
After the dish arrived the waiter put a full tea spoon of caviar on it and advised us to mix it in the running egg yolk. I thought the egg white was a tad undercooked but overall it was a very nice dish with nice combinations while the salty Parmesan sauce was remarkable, the pork had good depth of flavor and the caviar paired indeed very well with the egg. 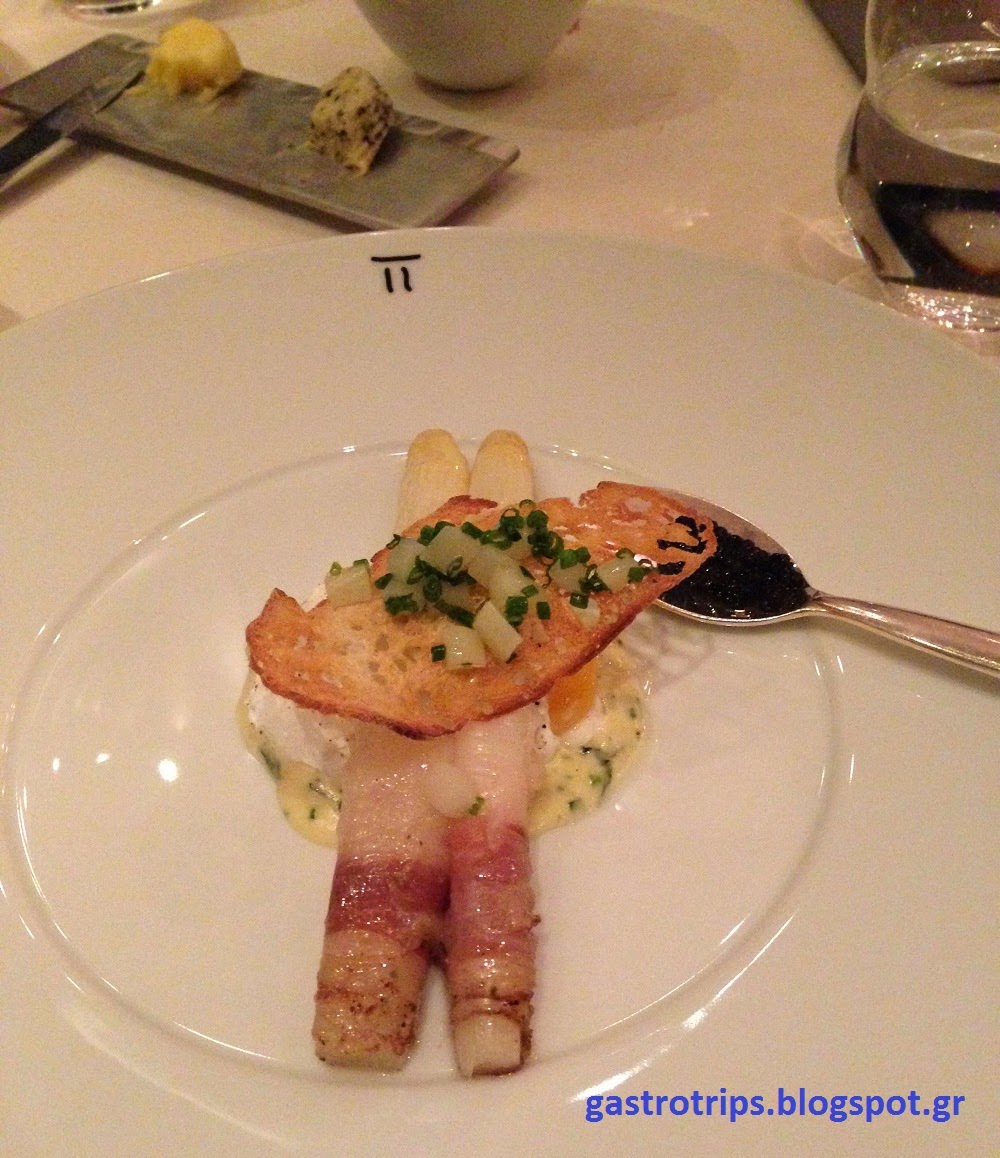 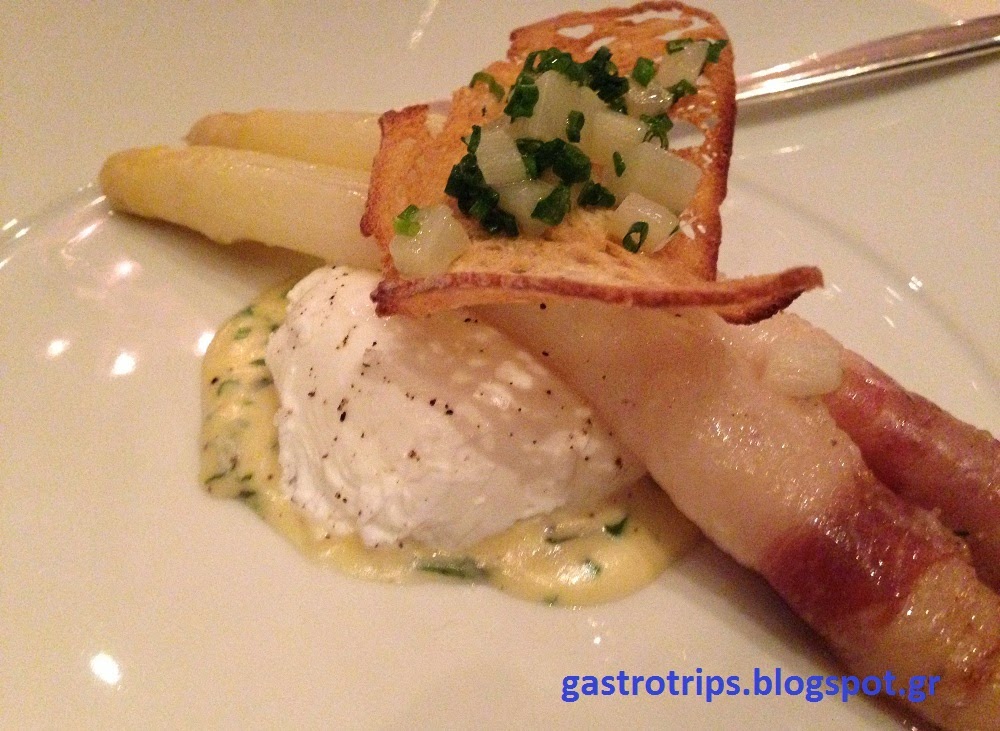 Wild seabass grilled then finish in a citrus butter.
Broth of green peas a la francaise.
A small thick piece of seabass, perfectly cooked with peas and pancetta on top. The waiter then poured the intense and amazing broth on top. On the side a pea puree with crunchy dry pea pieces. The dish was very good, with only the peas lacking a bit in depth of flavor. 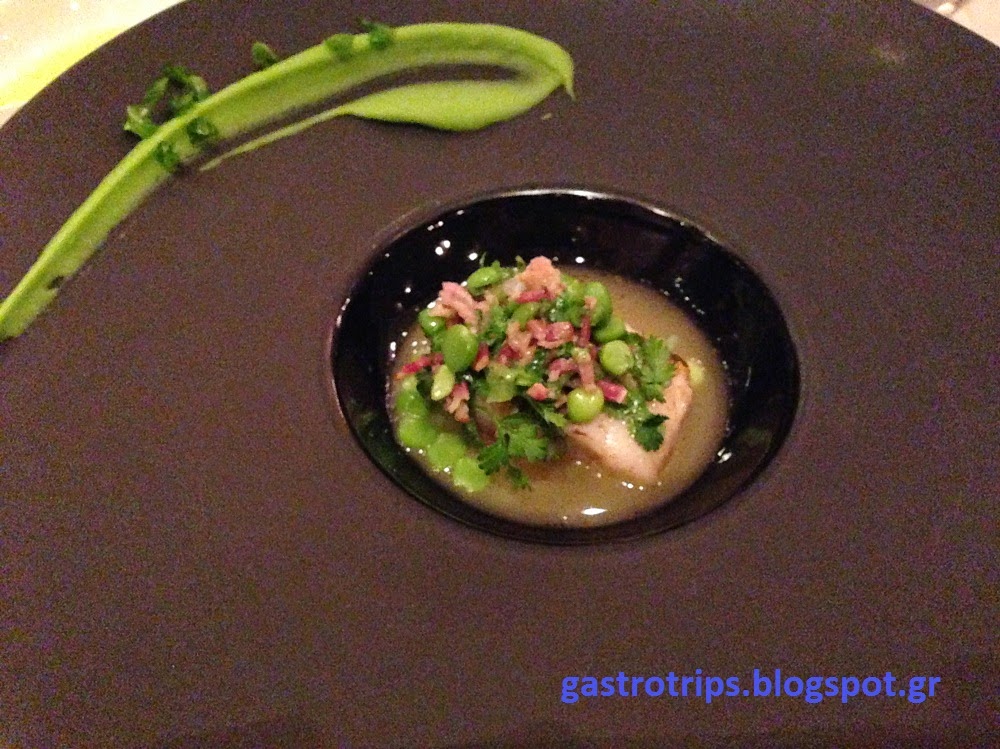 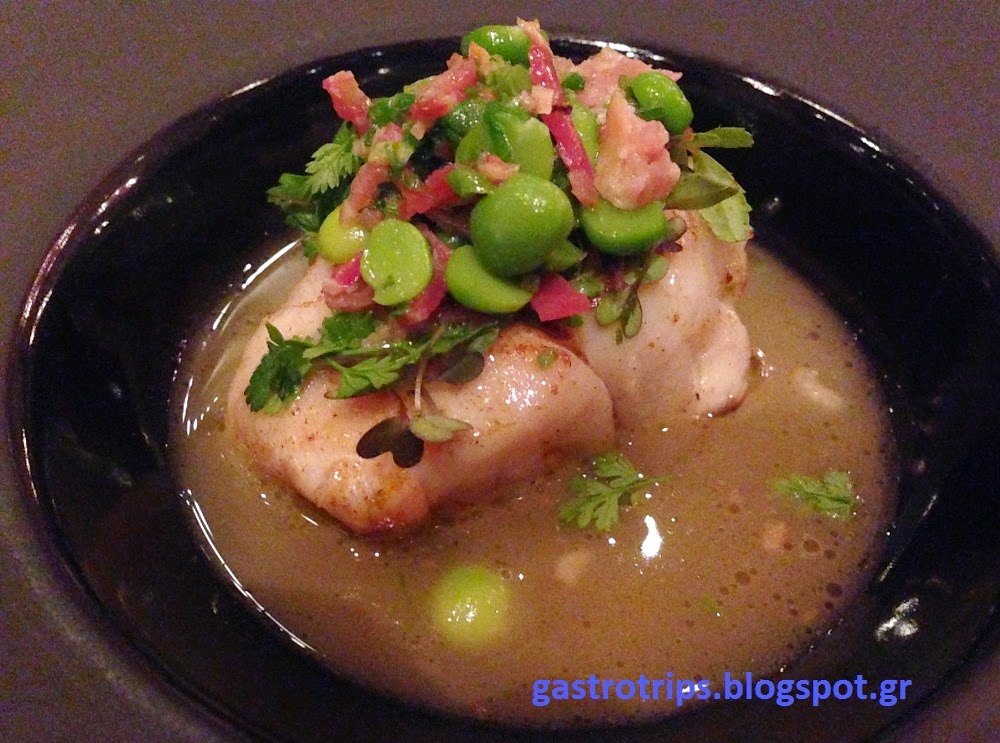 Roasted Royal Pigeon-
cut in thin aiguillettes and served in a juice
perfumed with chocolate, rhubarb and celery, spring onions.
Couscous flavoured with cinnamon,
smoked eggplant cream.
The pigeon was tender and gamey with the rich chocolate sauce while the acidic orange thick gelatinous sauce that you can see above cut well through it and balanced the richness of the first.
Couscous was very fine, on top of eggplant cream which we both found a bit bitter. 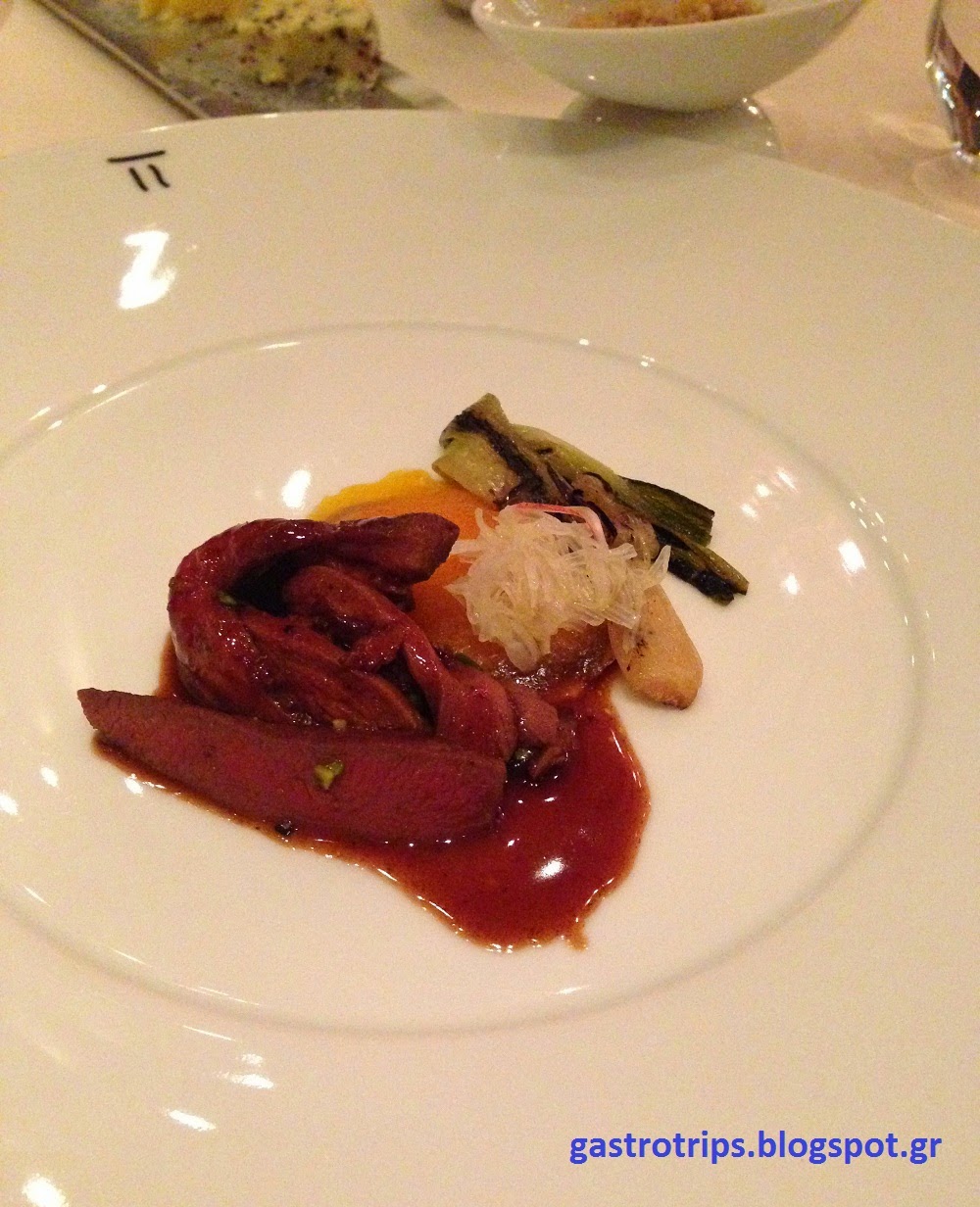 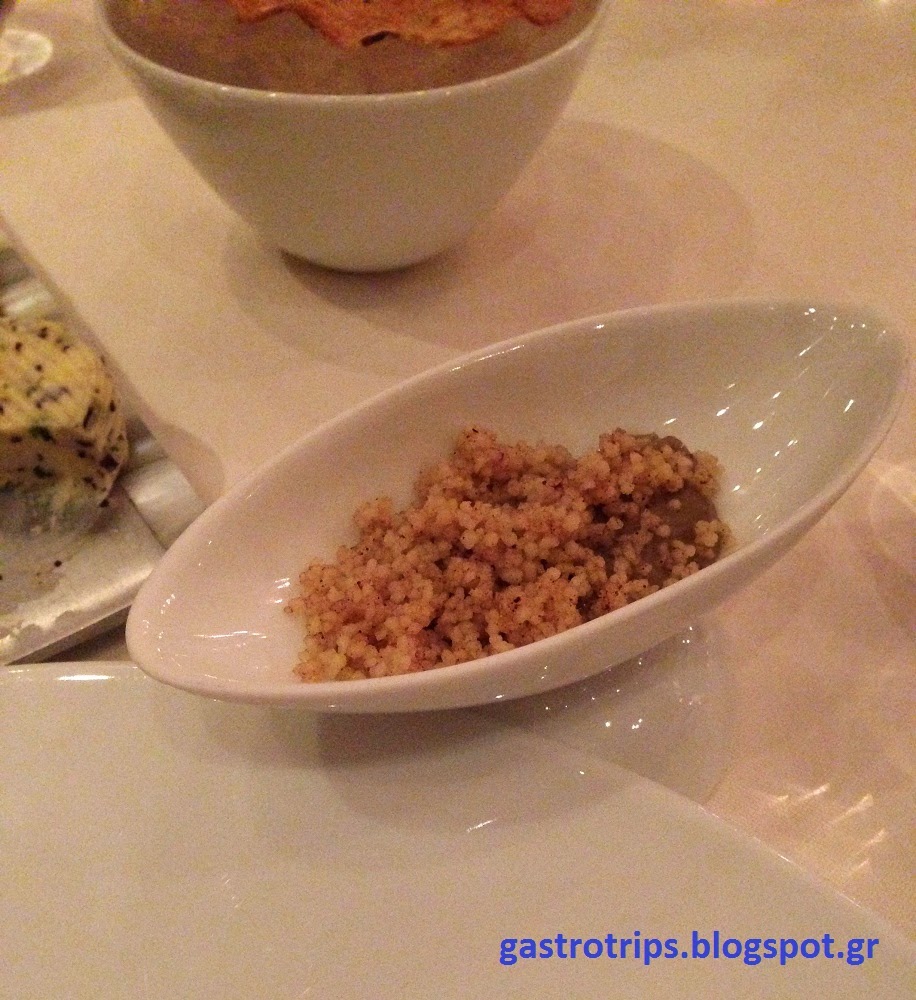 Some pre dessert mignardises followed which were all amazing. 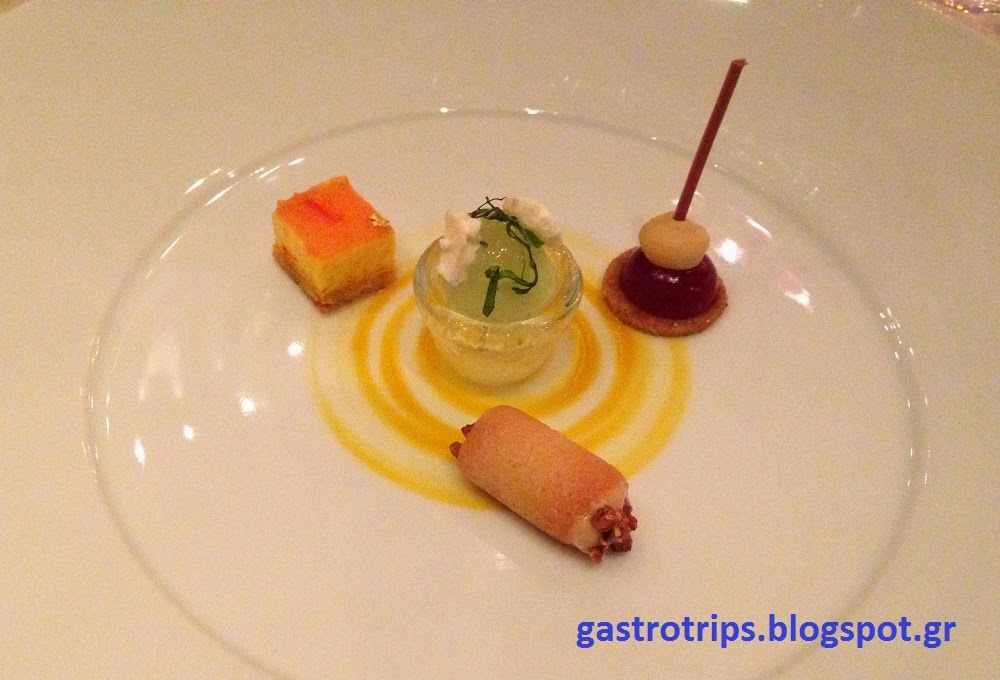 Les desserts de Pierre Gagnaire.
Three different desserts came then at once. The first raspberries, rhubarb and pomegranate was light and pretty good.
The second, mango thinly sliced making a cylinder filled with English pudding, salted butter caramel, crispy caramel pieces and butterscotch whisky was stunning. In fact it was one of the best desserts I have ever had.
Lastly on the third plate, two layers of chocolate with peanut butter cream between, banana and litchis cream on top with drops of bitter chocolate. Again this was amazing.
I have to admit I enjoyed the desserts even more than in Paris. They were totally amazing. 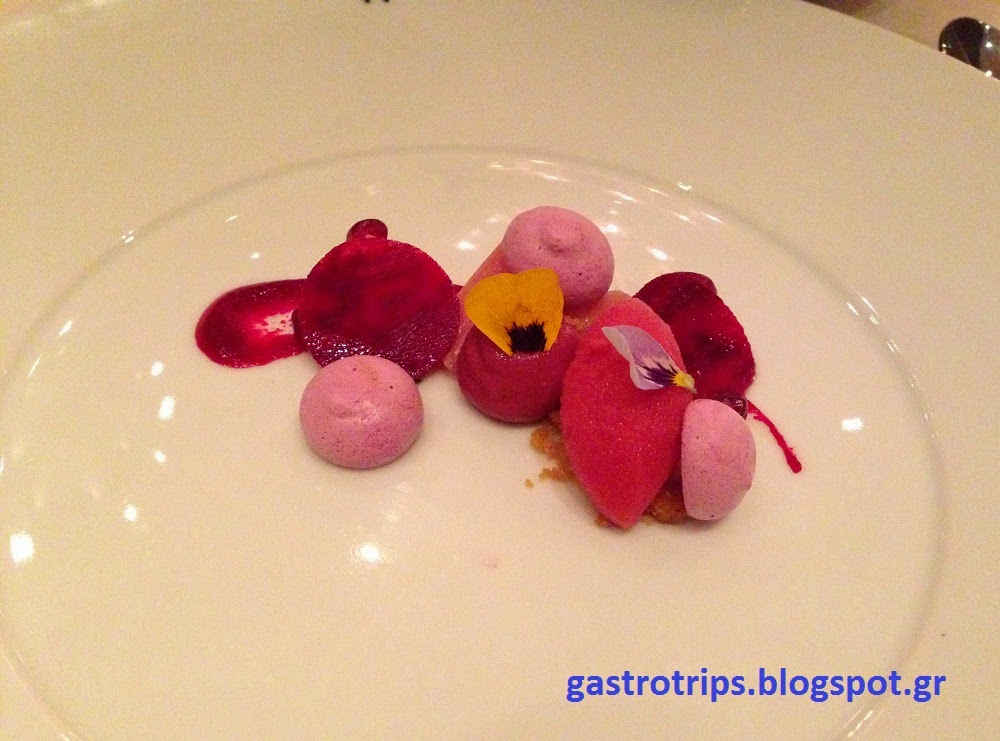 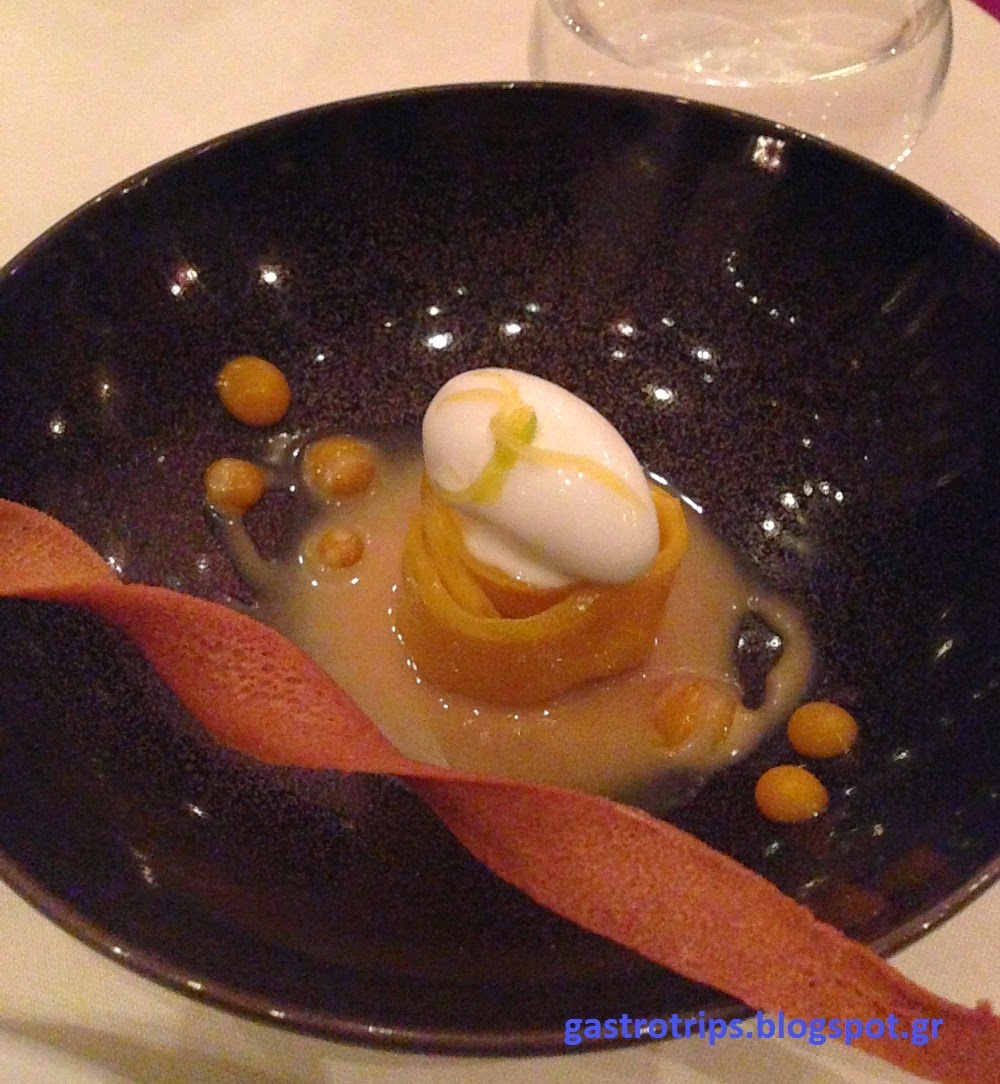 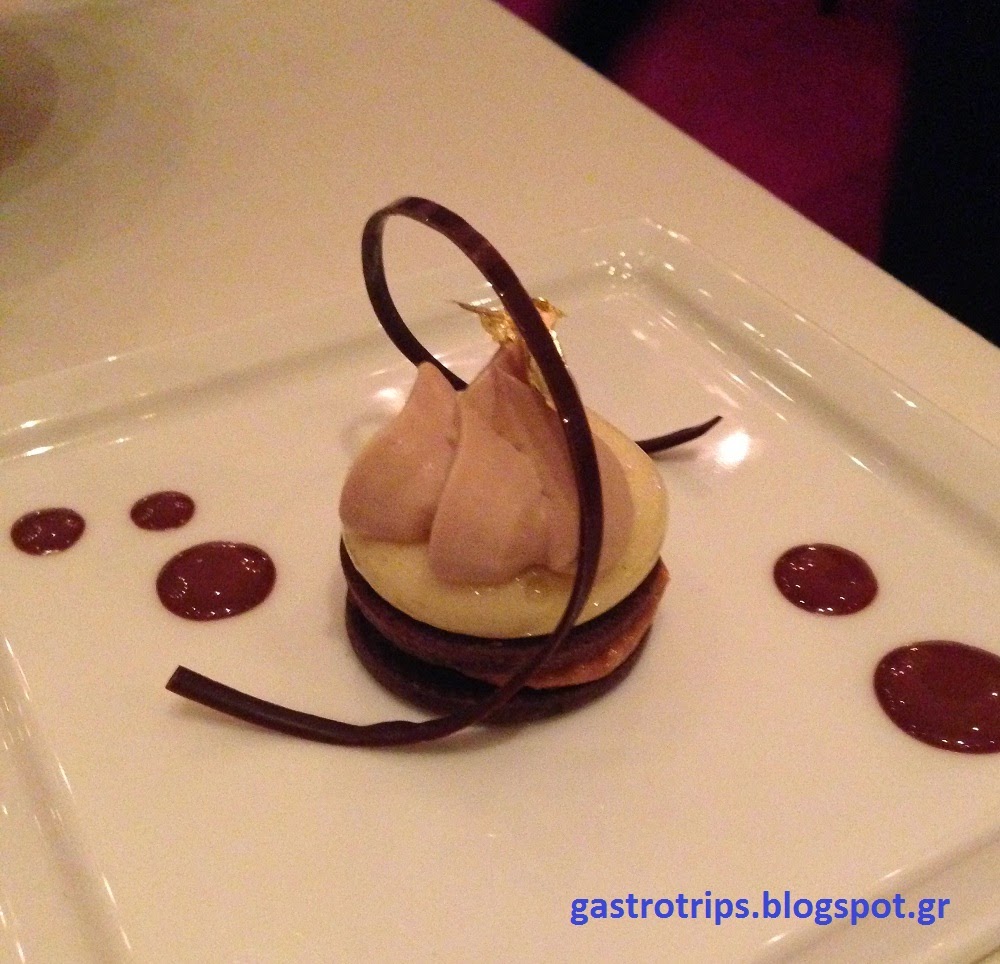 To finish we were offered some excellent chocolate pralines and just before leaving the restaurant the lovely lady of the reception of the restaurant treated us with a glass of a house made cocktail. 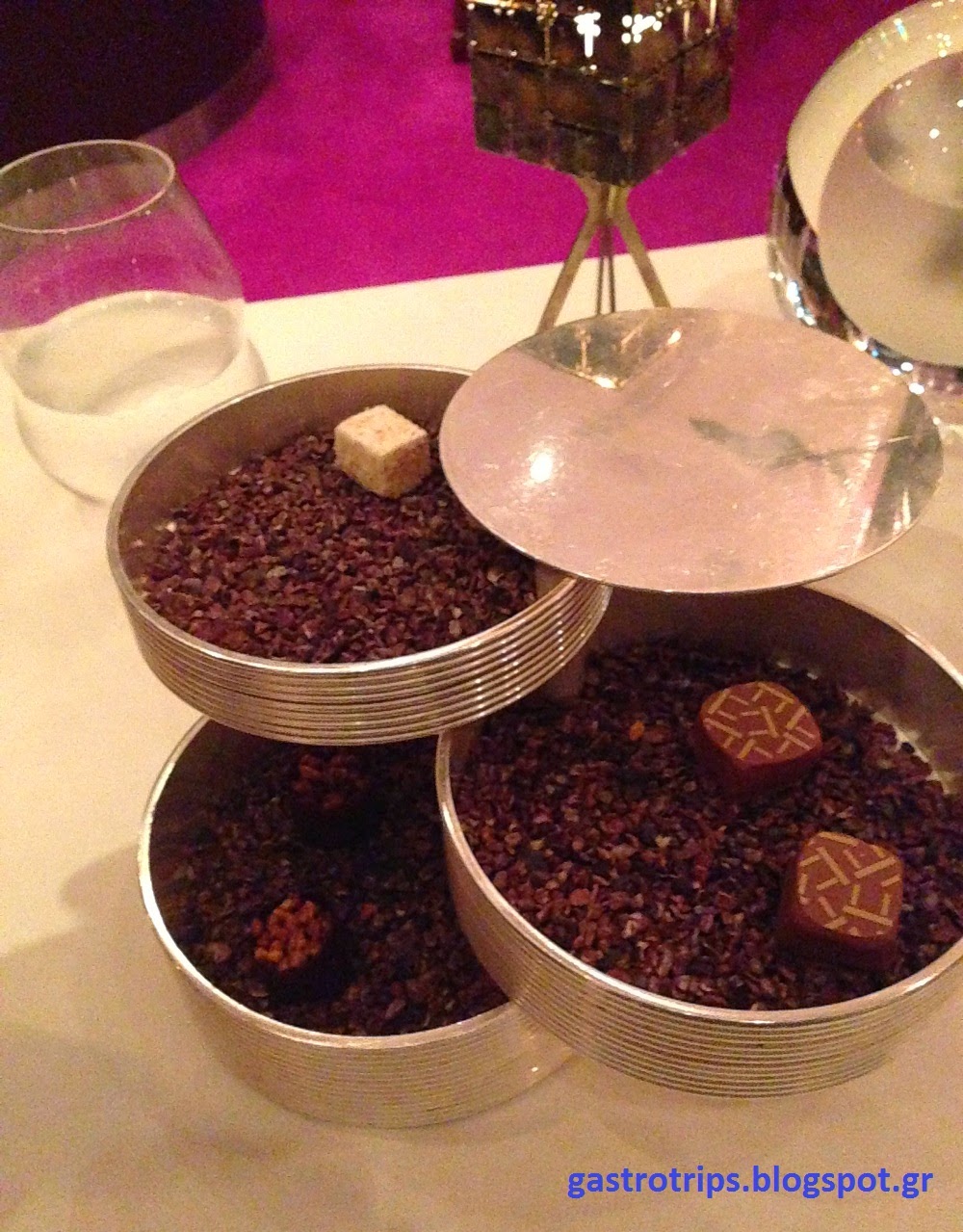 The wine list has wines from France and all around the world. There are also many wines by glass.

The service was very good, professional and attentive. Glasses and bread were refilled promptly. The manager was French and every waiter fully explained every dish on the menu.

We really enjoyed the evening, as for the food, service and setting, so I highly recommend this restaurant.
See also:
Pierre Gagnaire, Paris (3 Michelin stars)