Burj al Arab, the famous hotel of Dubai, opened just before the Millennium and became an iconic statement of Dubai, maybe the most recognisable one, holding the atypical title as the only 7 star hotel in the world. Build to look like the sail of a ship, on an artificial island just 280m from the coast connected with a private curving bridge. There it stands at almost 320 meters high (that is Eiffel tower high) making it the third tallest hotel in the world. It was actually the tallest back then.

Designed by architect Tom Wright, as a V shape building with the two sides connected by fabric enclosing this huge atrium from the lobby to the last floor. On each side the entrance to every single of its suites, 202 of them ranging from 169sqm to 780sqm for the royal suite. The colourful atrium was as impressive as it gets. 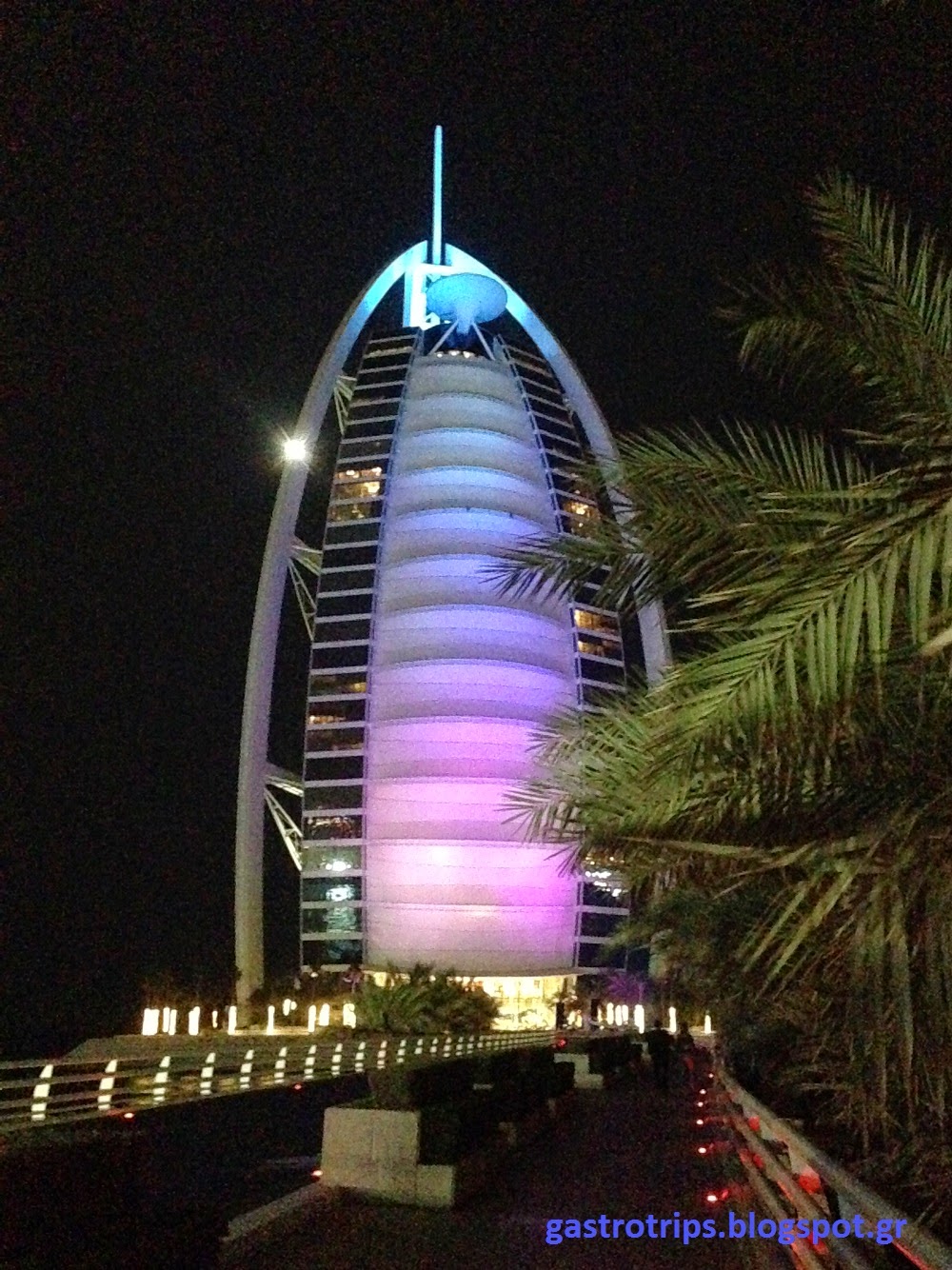 Inside Burj al Arab you can find many restaurants and bars. The most iconic being the Al Mahara meaning ''the oyster shell'' 2 levels below the entrance level with the huge aquarium in the middle of the round dining room, Then there is the Al Muntaha, meaning ''Highest'' or ''Ultimate'', located on the top floor 200m above the Persian gulf offering views of Dubai. Al Iwan serves Arabic cuisine in buffet, Bab al Yam the poolside restaurant is about al fresco dining, Junsui has far east Asian buffet and Sahn Eddar on the first floor is for breakfast and afternoon tea. There are also two bars, the Juna lounge just outside the Al Mahara and the Skyview bar near the Al Muntaha.


To access the Burj al Arab you have either to be a guest of the hotel or have a confirmed reservation in one of their restaurants and bars. You can only make a reservation to the Skyview bar where you can have famous cocktails from movies or some finger food, while there is a minimum spend per person. Making a reservation was easy via emails which were answered promptly, although they require a credit card to secure the reservation provided either by email or by phone. It was the only restaurant in Dubai that asked for credit card details, but we were not surprised as this is the norm in France or England for example in most fine dining restaurants.
The restaurant was full during our dinner so I would suggest that you book well in advance to avoid any inconvenience. 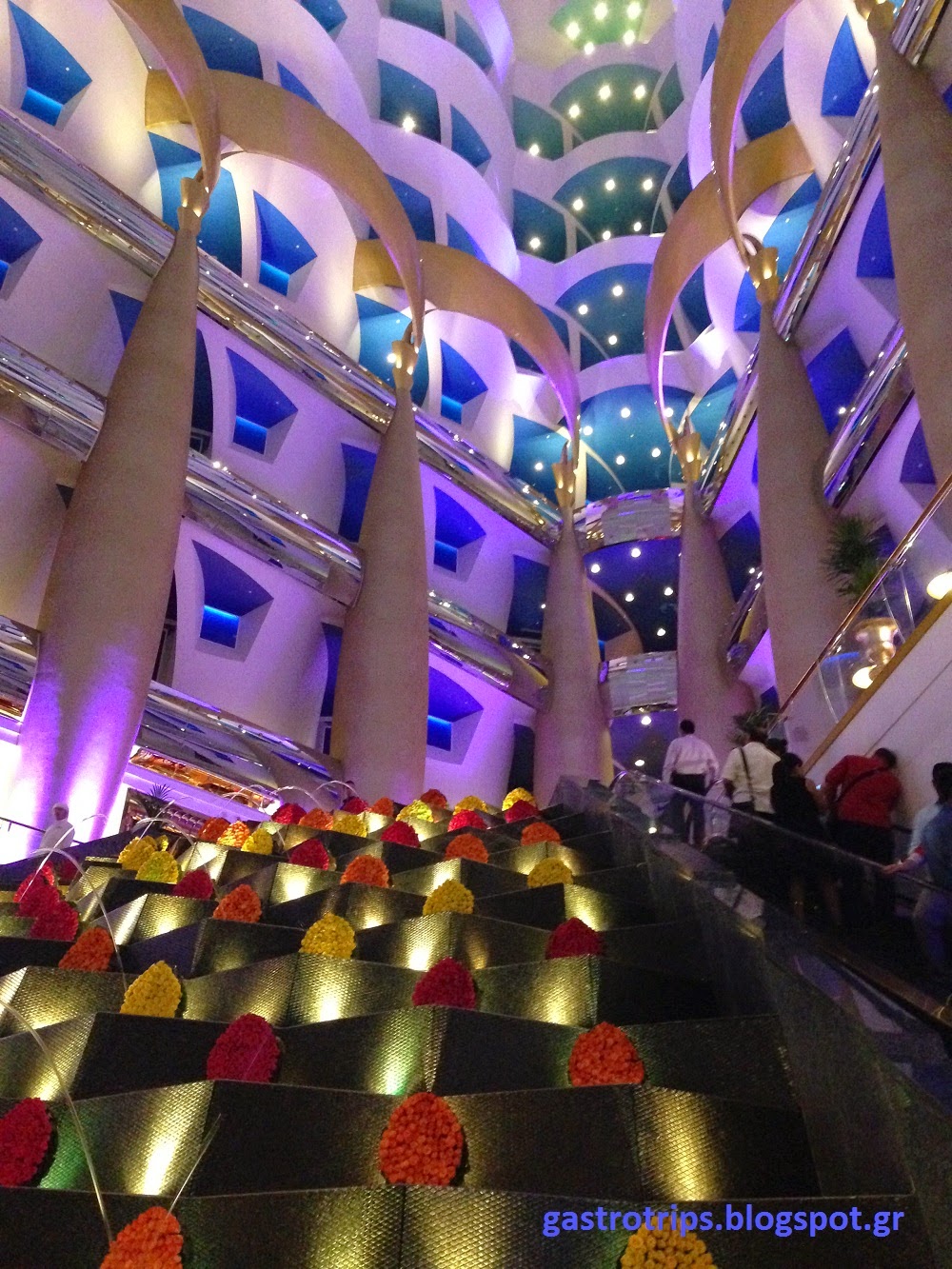 Getting there is easy by any part of Dubai as taxis are very affordable. In the entrance before entering the bridge to reach the artificial island where the whole structure is standing, we were stopped by a security man requesting the name of the reservation. After checking my name on his list he lets us in. Access is provided half an hour before the time of the reservation.

After taking a look at the amazing lobby and atrium where a pianist was playing live we went to the restaurant entrance. A lady greeted us and showed a golden elevator which leads to the Al Mahara below the sea level. Some time ago you would reach it via a simulated submarine, but not now.

The chef of Al Mahara is the French Renald Epie. He started his career in the culinary world at the age of 15 in Chicago, only to become a chef at the age of 21 at La Villa Colonial in France. He worked at Alain Ducasse's flagship Monegasque restaurant the Le Louis XV, in Hotel de Paris and other famous restaurants of France like L'Ami Jean and Spoon. He joined the Burj al Arab in 2013 as Chef de cuisine.

In the restaurant we were greeted again and shown our table. They advise us that smoking is not permitted inside the Al Mahara and that there is a smoking lounge for those who smoke near the entrance. The hall to the main dining room shaped like a tunnel was gold plated. Now, to the main circular room there is a huge aquarium in the center with over 990.000L of seawater and fishes from all around the world. You can see colourful fishes, small sharks and rays. The wall of the tank which stands from the floor to the celling is made by acrylic glass and is 18cm thick in order to withstand the water pressure.

After we were seated a waiter came to introduce himself, knowing my name in advance, as he was going to serve us for the whole evening. He also did some recommendations about their specialities. 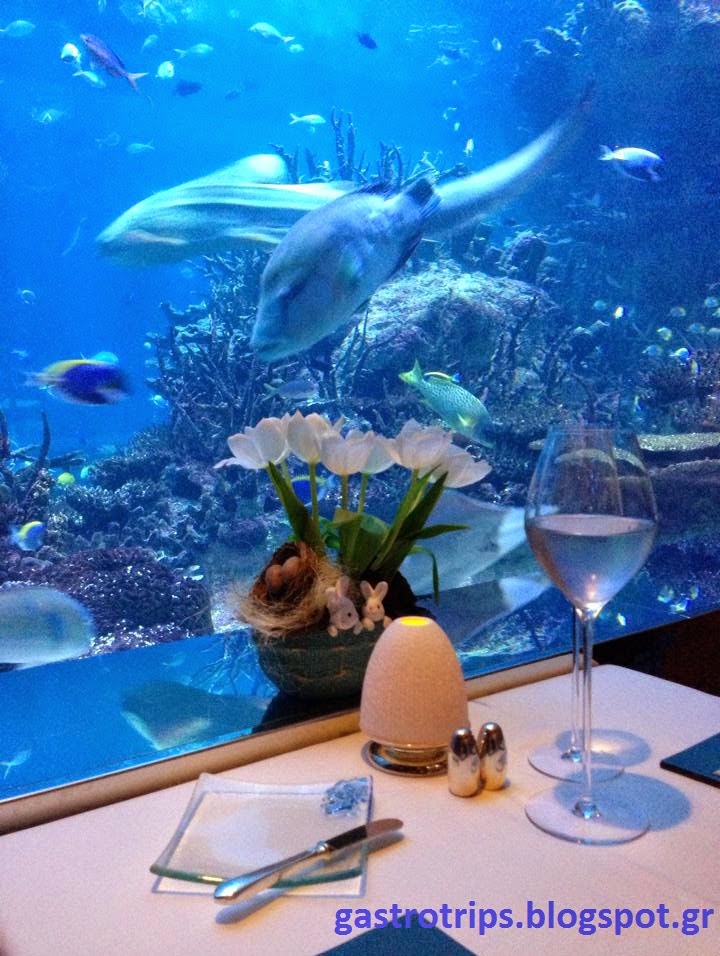 There is a degustation menu with 5 courses plus 2 desserts and the a la carte option focused most in seafood while some meat dishes are available. You can find chicken, lamb or even Australian wagyu. To start you can also choose some caviar, kristal, osierta, beluga served with homemade blinis Melba toast, creme fraiche, shallots and chives. 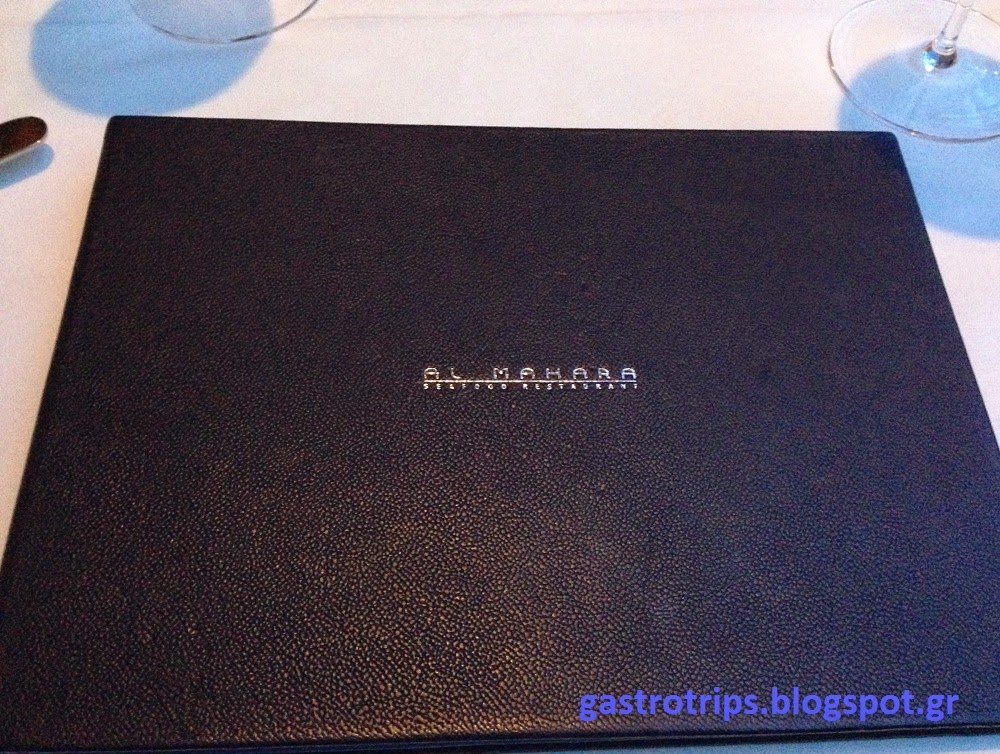 We started with bread and butter and an amuse bouche. Bread was of 5 different kinds, baguette, seaweed, squid ink, raisins with walnuts and foccacia style. Generally it was good, I found the baguette and the raisin walnut one to be the best of them. Butter was plain, salted or with seaweed.
An amuse bouche of apple and blue cheese cream paired with walnuts and chilli was very good and refreshing. 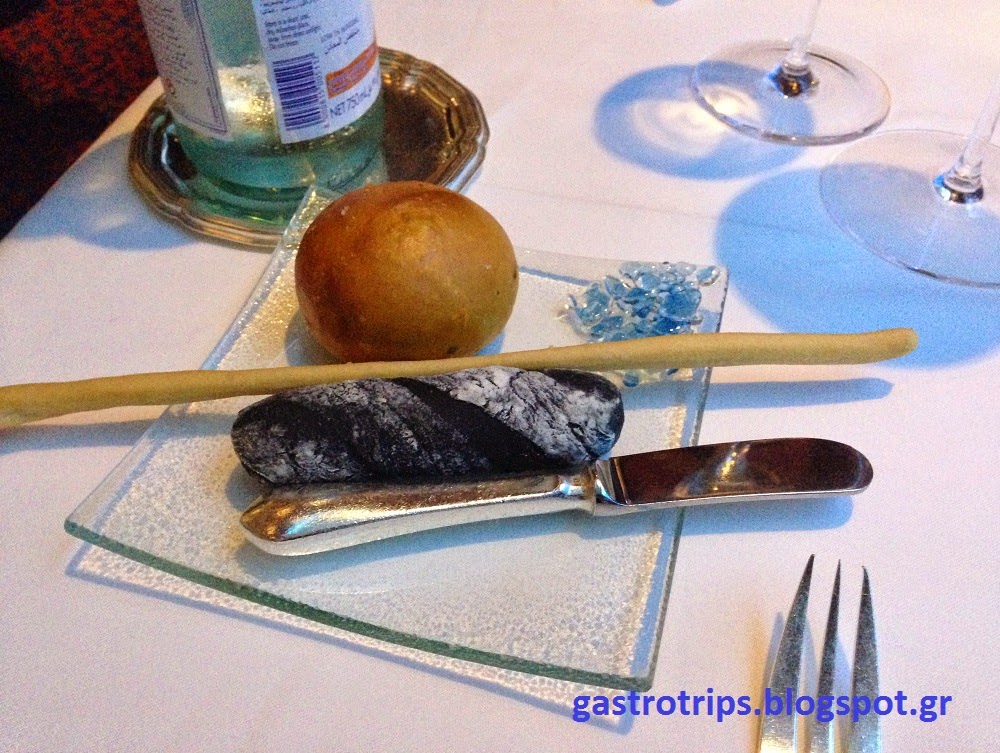 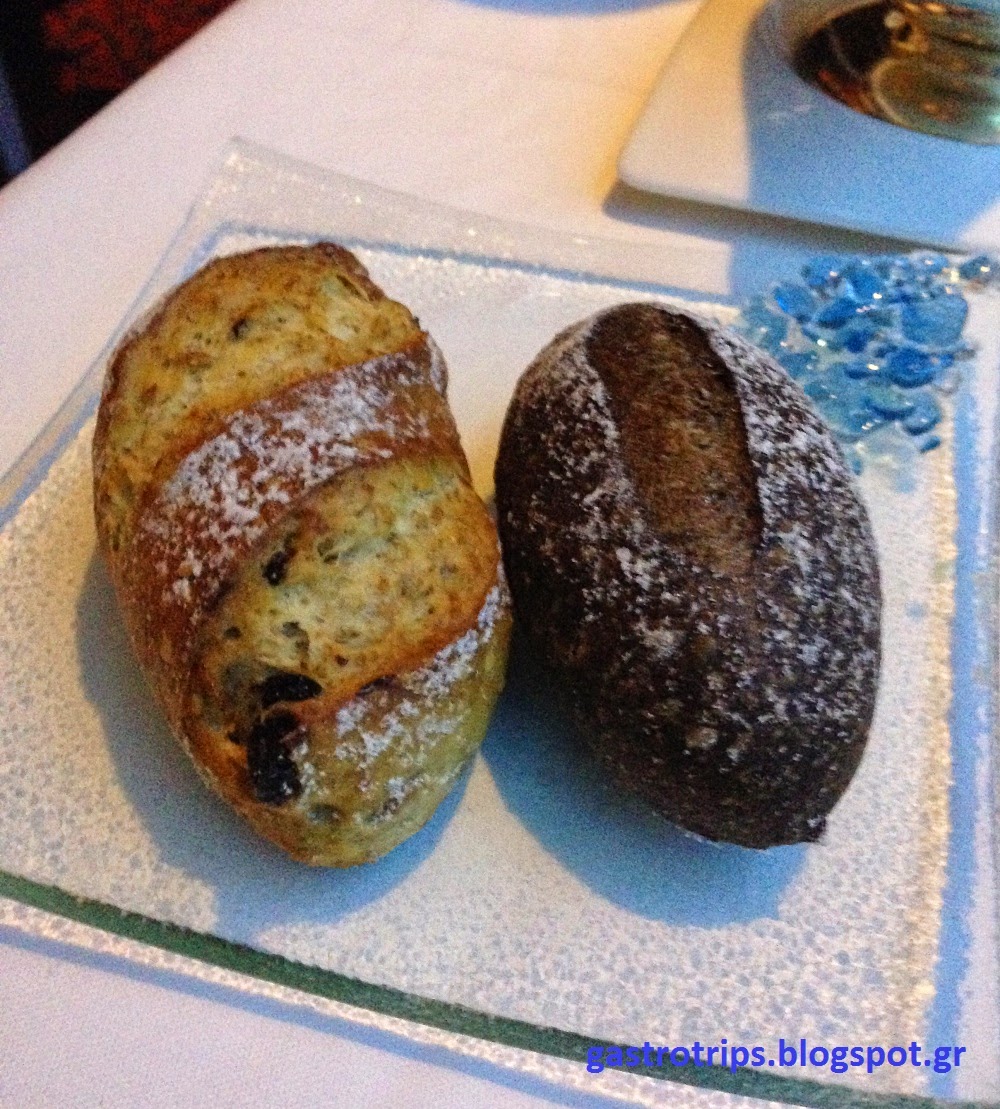 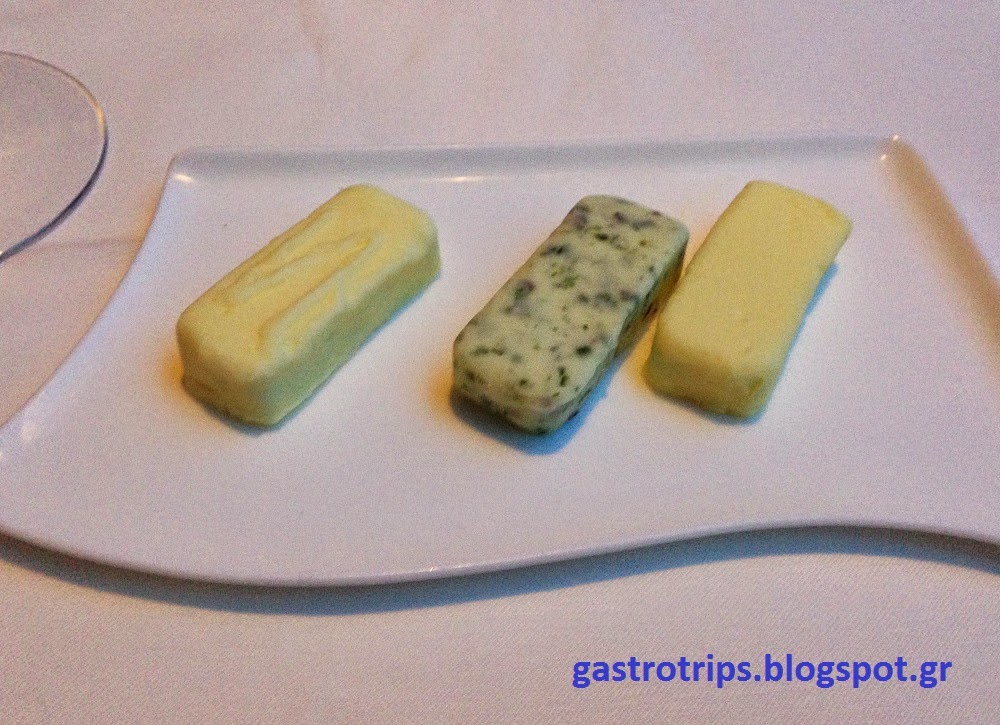 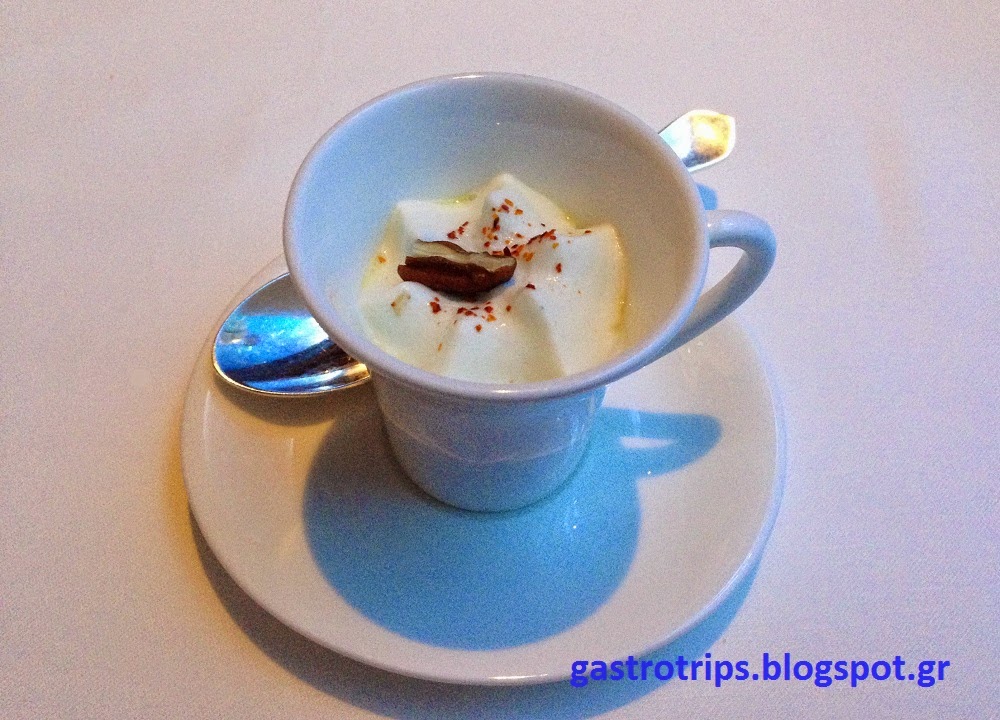 We chose one of the specialities of the house. Line caught whole seabass in sea salt crust. It was accompanied by three side dishes. Greek style vegetables, crushed ratte potatoes with olive oil both presented in small Staub iron cocottes and cucumber, dill salad like tzatziki. They also brought a sauce of mustard, tomato and herbs to pour on top of the fish to our taste.
The fish came inside the salt crust. The waiter cut through it in front of us revealing the big seabass. After removing most except the bottom part of the salt crust, he removed its skin and plated a fillet to each plate, then drizzled extra virgin olive oil on top. I regret they didn't add the best part of the fish, its cheeks. 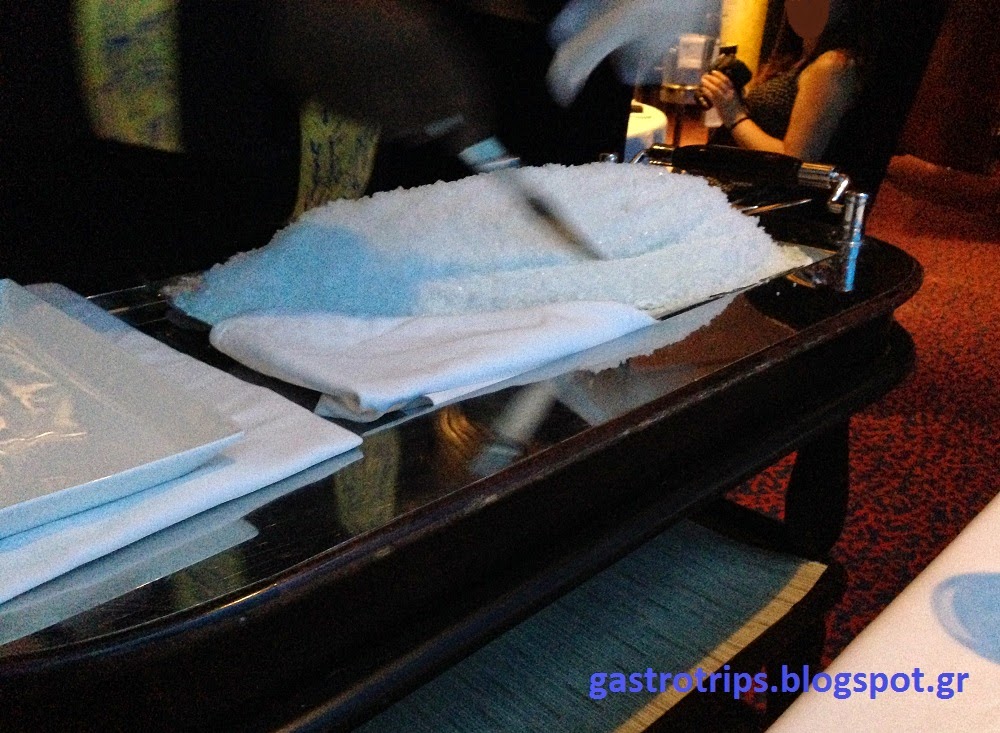 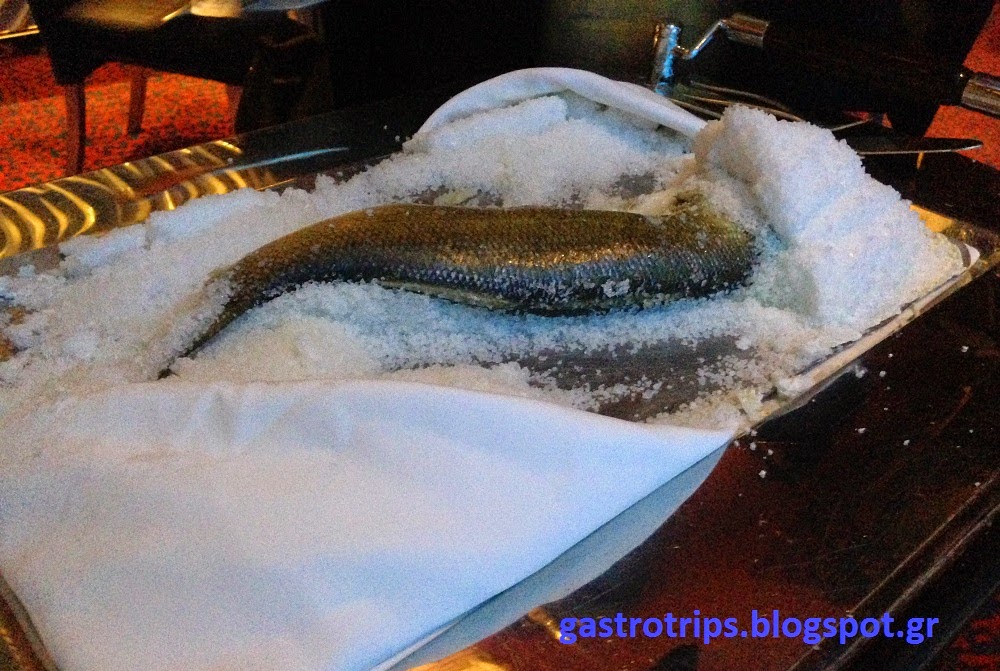 The fish itself was nicely cooked, having good flavor, being juicy (the reason of cooking into salt crust at first hand). I actually preferred its taste without the overpowering mustard sauce. Vegetables were of good quality steamed on time to be crunchy. Potatos were nice too while the cucumber and dill tzatziki dish was very refreshing. 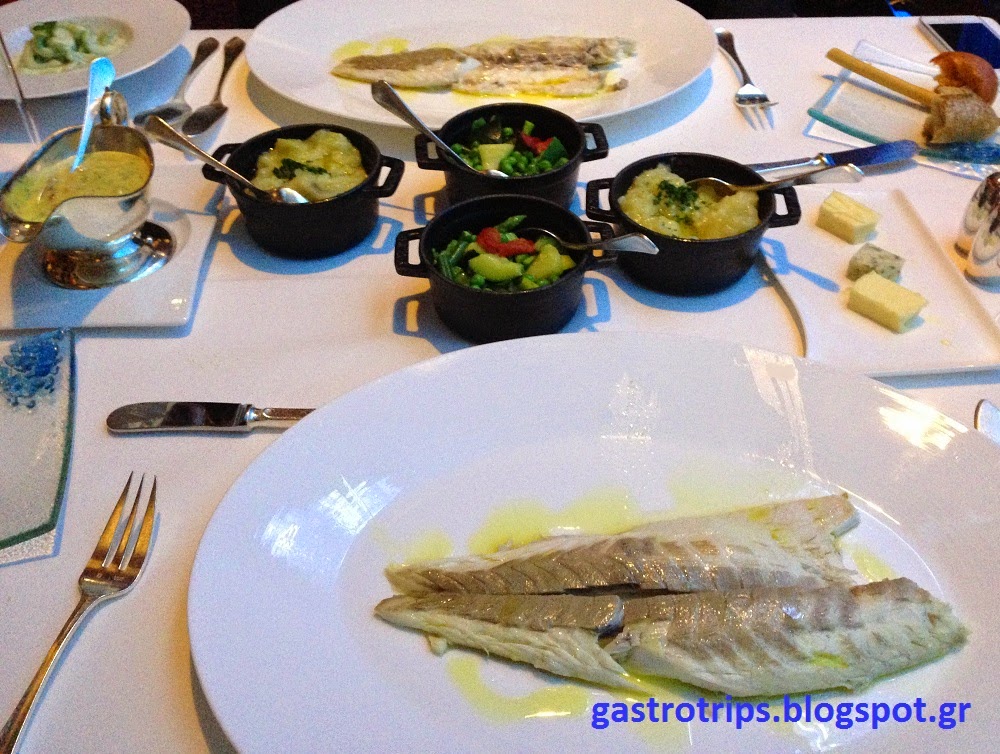 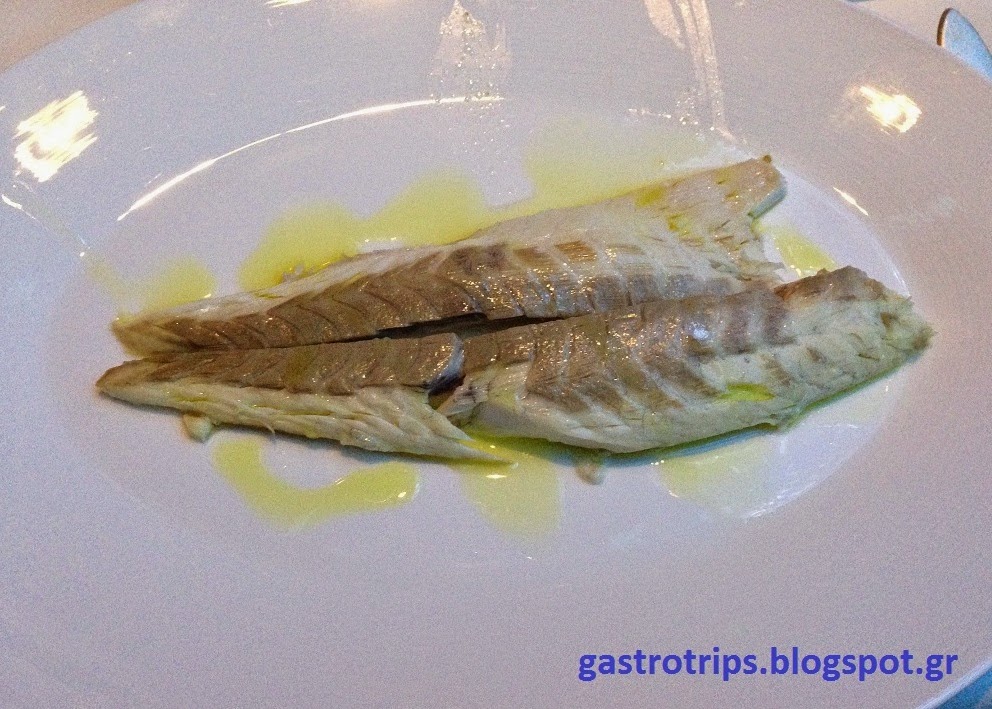 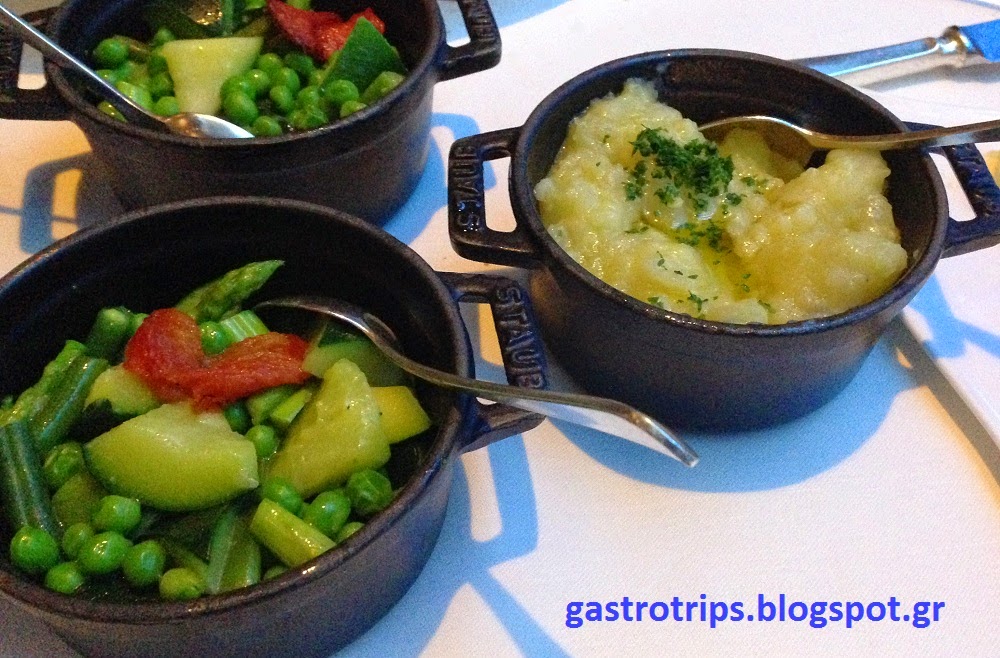 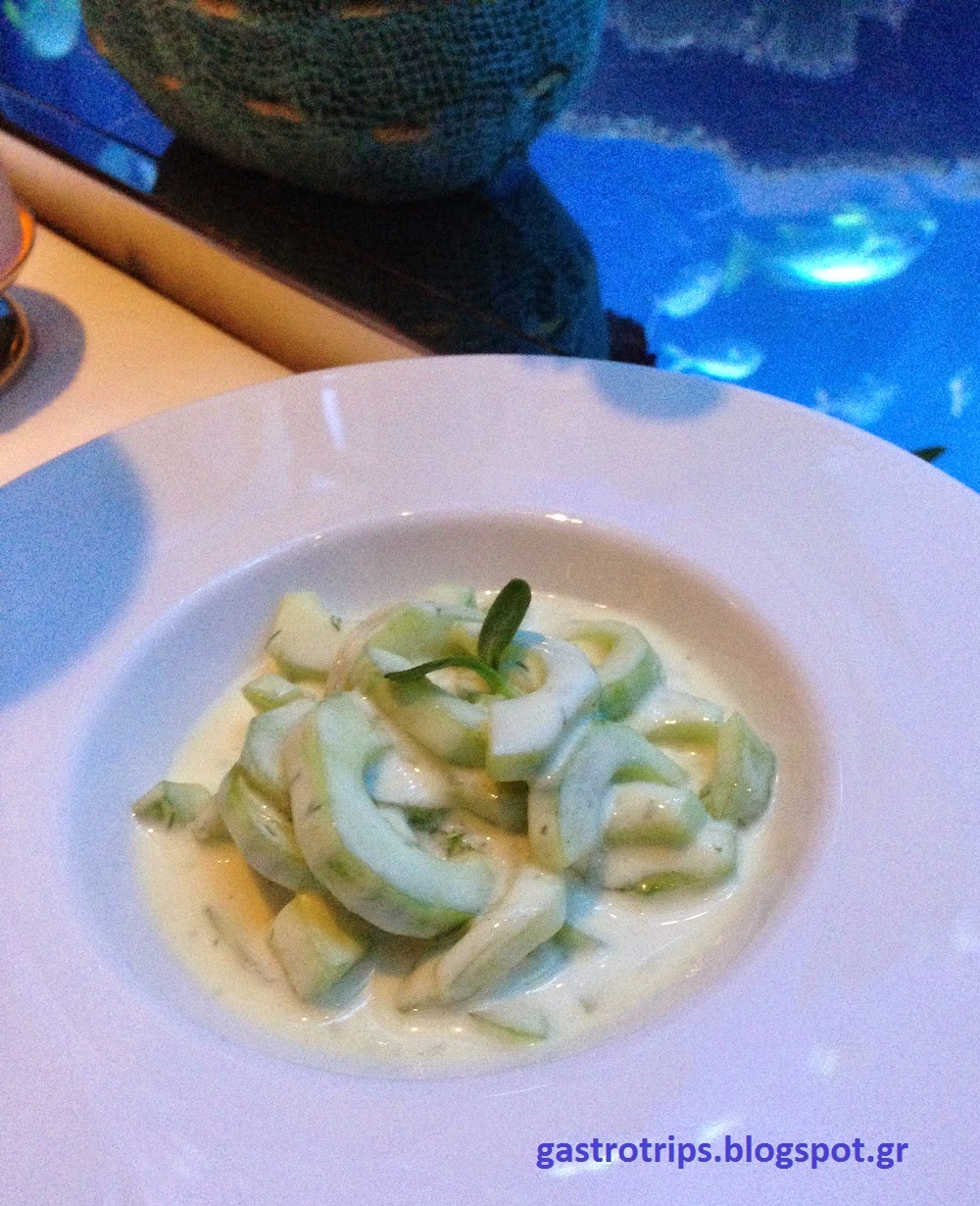 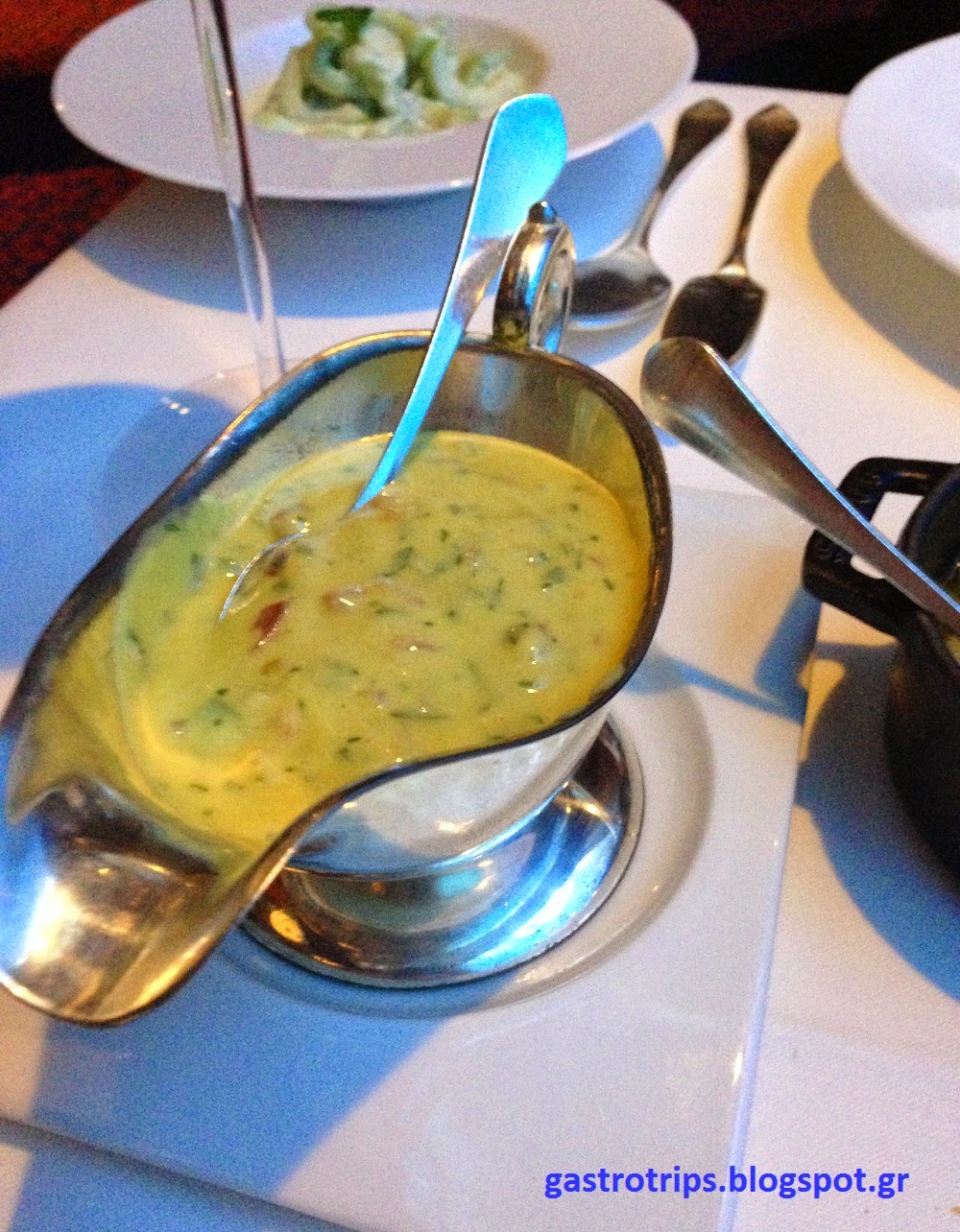 A predessert followed, banana cream with bits of butter biscuit was amazing. 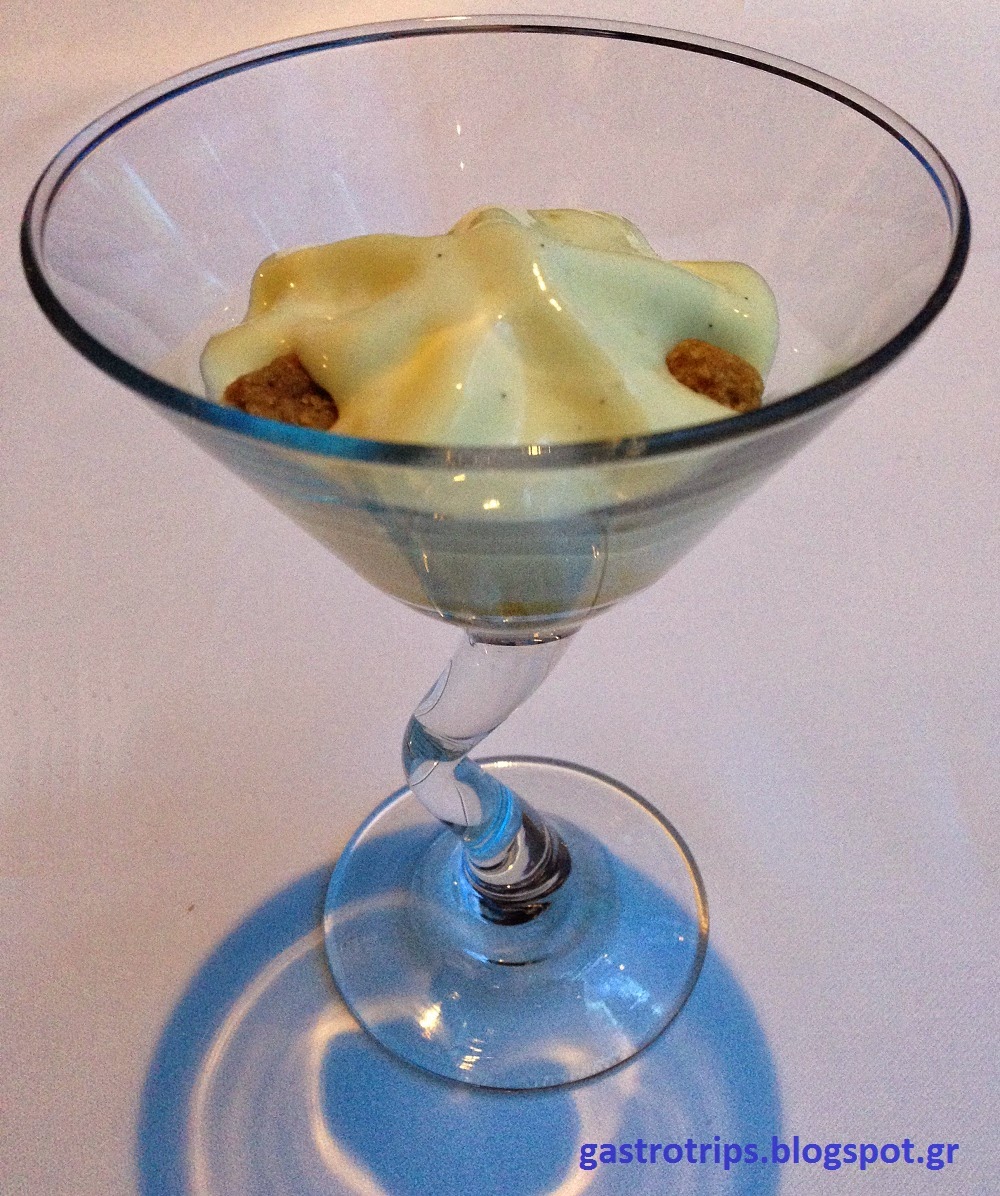 The dessert, Salted caramel mousse and peanuts, Tonka infused 46% Bahibe mild chocolate cream, cocoa and almond shortbread.
The round shortbread was filled with the milk chocolate ganache. On top a thin layer of milk chocolate, having a hemisphere of peanut butter mousse covered with thick liquid caramel and some pieces of gold. Peanuts and chocolate is a favorite combination of mine and this skillfully made dessert was top notch. 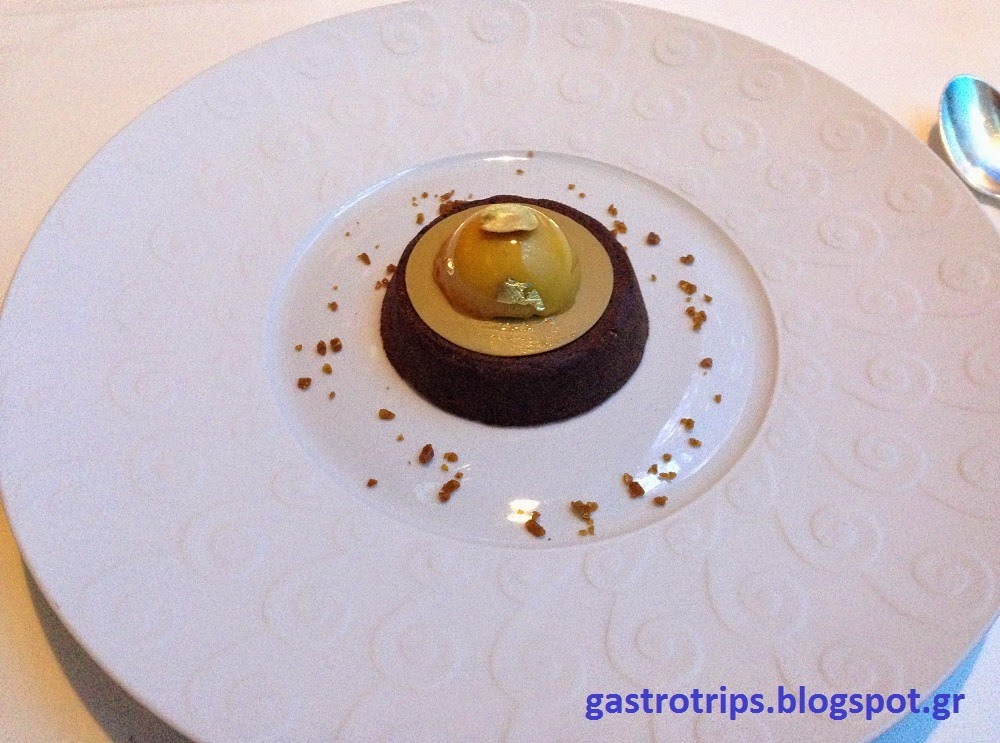 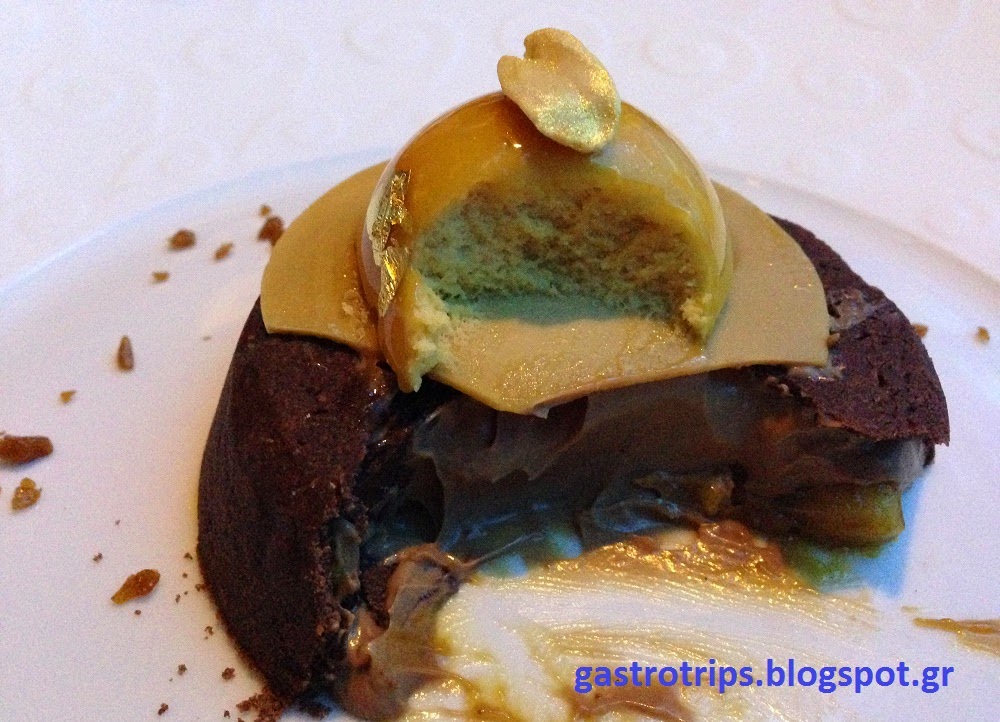 Lastly we were offered some mignardises. Clockwise panacotta on butter biscuit with red fruit sauce, croustillant praline base with chocolate, red berries macaron and cream, and a chocolate based nibble. All of them were excellent, although I don't get it why they brought only one of each for the two of us. 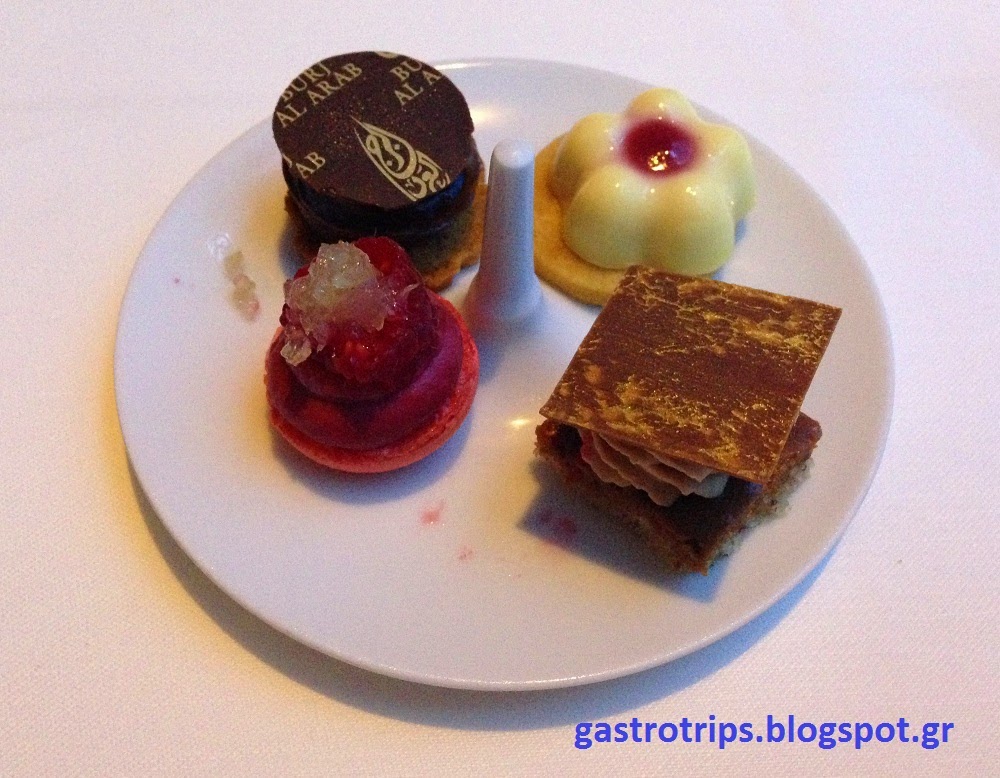 There is an extensive wine list with wines from France and all over the world. A bottle of water was 55 AED which is a personal record since now, if you also count that they failed to renew it after it was finished complimentary or with a charge. In contrary at Reflets par Pierre Gagnaire Evian water was 35 AED for the whole party unlimited refilled promptly for the whole evening.

So would I recommend this restaurant? The setting is stunning as also the hotel itself which made my jaw drop. The food is good but not amazing to justify the price and I would overcome this if there were not some of the misfires above.

What's more, on Burj Al Arab, many celebrities have done what they do best. On 2004 Tiger Woods teed off from the converted helipad on top of the Burj. A year later Andrea Agasi and Roger Federer played tennis and then an Aston Martin Vanquish was heli lifted to the top where again in 2013 David Coulthard performed donuts in a Formula 1 race car.